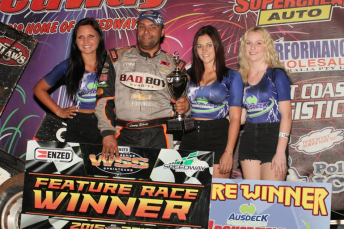 World of Outlaws champion Donny Schatz returned to the top step of the podium with victory in the Australian Open preliminary feature at Brisbane’s Archerfield Speedway.

The American racer, who witnessed his 14 race winning streak at the venue end earlier this week, produced an impressive come from behind drive in the race, which also doubled up as the seventh round of the World Series Sprintcars Championship.

Schatz quickly advanced from seventh to fifth in the opening laps as he took advantage of an early caution while Brooke Tatnell looked comfortable in the lead.

However, as Tatnell caught lapped traffic in the final 10 laps the gap between the top six closed.

This played into the hands of Schatz who used the high line to sweep by Andrew Scheuerle and Kerry Madsen to move behind Tatnell.

Schatz then made a successful move for the lead with two laps remaining where he stayed until the chequered flag.

Tatnell was left to settle for second while Madsen completed the podium in third.

“We did a lot of experimenting tonight which made me nervous a few times so I think we will just go back to setting the car up the way we know it can work which would make me a lot more confident tomorrow (Saturday),” said Schatz.

“Winning tonight just helps me claw back some points on Brooke so hopefully tomorrow we can start a little closer to the front because 50 laps of the long way.”