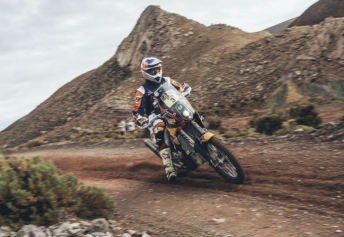 Toby Price claimed his second stage win of this year’s Dakar Rally to climb to third in the overall rankings.

The Australian rider produced a near perfect ride through the 327km Stage 5 from Jujuy to the Bolivian town of Uyuni taking the win by 2 minutes and 33 seconds from fellow KTM rider Stefan Svitko.

Austria’s Matthias Walkner came home in third ahead of Joan Barreda Bort, while rally leader Paulo Goncalves could only finish in 12th position.

Price’s second stage win, following the victory on Stage 2, has seen him close the gap on the lead group significantly rising from ninth to third in standings.

The 28-year-old from Newcastle is just a minute and 47 seconds behind the overall leader Goncalves.

“This marathon stage was definitely difficult. Today was a little bit tricky with the navigation. I had to stay on top of the game,” said Price.

“I caught a couple of other guys and got in some dust. I made a couple of little errors in the end there, because I was a little too worried to take my eyes off the road. It was a pretty crazy track.

“All in all, we’re stoked. I didn’t expect to be that far ahead for the day.

“We’re stoked. We’ve got another long day tomorrow and we’ll see how we do.

“We’ve just got to keep pushing along and do what we can. Fingers crossed, but there’s still a long way to go.

“We can’t count on things just yet. Today is only day five. We’ve got another seven or so stages to go and it’s a long way. Anything can happen between now and then.” 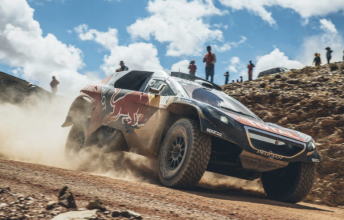 Meanwhile, Sebastien Loeb claimed his third stage win as he extended his rally lead out to almost eight minutes.

The nine-time WRC champion eclipsed his Peugeot team-mate Carlos Sainz by 22 seconds on the stage but more importantly he was three minutes ahead of his nearest rival Stephane Peterhansel, who finished the stage in third.

Nasser Al Attiyah emerged as the best of the rest with the Mini driver fourth just seven seconds adrift of Peterhansel.

Loeb’s third stage win has seen the Frenchman open up a lead of 7 minutes and 48 seconds over Peterhansel with Sainz in third a further five minutes back.

“I think we lost maybe twenty seconds at a junction. Daniel (Elena co-driver) told me the right way, but for the rest it was ok,” said Loeb.

“I had a good feeling and the car was perfect again, so there’s nothing to add. It was a good day and tomorrow we will be first on the road so it maybe will be another story, but it’s a part of the experience that we have to take.”

The Australian entry of Peter Jerie and Dale Moscatt are lying in 38th position.

The Dakar Rally continues today with a stage held in Uyuni.