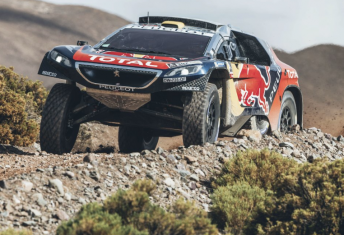 Stephane Peterhansel on his way to victory on Stage 4

Stephane Peterhansel clinched victory on the fourth stage of the Dakar Rally as Peugeot asserted its authority on the event.

The 11-time Dakar Rally winner denied overall leader and team-mate Sebastien Loeb a hat trick of stage wins with the Frenchman heading a Peugeot lock out of the top three positions.

Peterhansel finished the 429km Jujuy special stage with an 11 second margin over two-time WRC champion Carlos Sainz, while Loeb had to settle for third 27 seconds adrift of the leader.

Last year’s winner Nasser Al Attiyah emerged as best of the rest with the Mini driver finishing fourth albeit 4 minutes and 57 seconds behind the lead Peugeot.

“It’s very good news. Our engines have been fine-tuned to work much better at altitude this year. It helps us drive properly, the car’s well balanced,” said Peterhansel.

“We worked hard all year, but aren’t too proud yet because we know we weren’t able to carry out all the tests we wanted, and it’s just the third day of racing.

“We had a good special, with no navigational mistakes and a high pace from the beginning. Our work is paying off.”

A strong run from Loeb ensured he maintained his overall rally lead although it has been cut to 4 minutes and 48 seconds, with Peterhansel lying in second spot.

Al Attiyah is is third overall but is more than 11 minutes adrift of rally leader Loeb.

South Africa’s Leeroy Poulter has moved into fourth spot with Sainz recovering to fifth after losing 10 minutes with an engine issue on the opening stage.

In the motorbike class, Australian rider Toby Price has moved to eighth overall after finishing stage four in sixth position.

The 28-year-old from Newcastle finished the test 6 minutes and 48 seconds behind stage winner Paulo Goncalves.

Goncalves, riding for Honda, dominated the route as he reached the finish with a margin of 4 minutes and 46 seconds over stage three winner Kevin Benavides.

As result, Goncalves leads the overall rally by 4 minutes and 26 seconds from Benavides with Joan Barreda Bort in third.

Price remains in contention but the Red Bull KTM rider is 10 minutes and 43 seconds behind.

“Today was a pretty solid stage for us, it’s good to bounce back after a rough stage yesterday especially it being our first marathon stage,” Price said.

“The marathon stage wasn’t too difficult but at the same time it was really high-speed so I guess it suited me quite well.”