Stoner: Marquez felt threatened by me at Honda 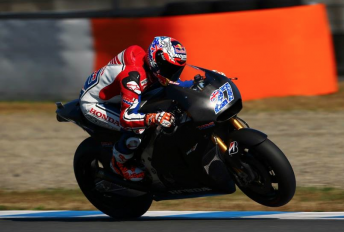 Casey Stoner believes Marc Marquez felt threatened by his presence during his role as a development rider at Honda.

The Australian two-time world champion has worked as a test rider for the Japanese manufacturer for the last three years following his retirement from MotoGP in 2012.

During the period Stoner completed several tests to aid Honda’s development of its MotoGP machines, but he feels the firm did not utilise him enough to appease its double world champion rider Marquez.

“At Honda I was just an occasional tester, I did not have any other role and, to tell you the truth, they never took full advantage of my potential,” Stoner told Motosprint.

“I think Marquez and all his entourage felt threatened by me. I don’t know why they thought that, but that’s my feeling.

“I was at Honda to do some testing, to try new things that could then be transferred to the works riders, so I was there to help Marc.

“But it’s also true that the number one rider is the one everyone must follow.

“I have no grudge against Honda. And I have great respect for (HRC vice president Shuhei) Nakamoto. As a matter of fact I’m certain that our relationship has not deteriorated for this and that we’ll get on well.”

Stoner emerged as a contender to replace the injured Dani Pedrosa last season but the Queenslander has also suggested that pressure from within saw the opportunity disappear.

“I felt ready for Austin. Nakamoto told me he was sorry, but he was taking responsibility for deciding towards a different solution,” he added.

“At this point then, I think other people must have put pressure on him in order for me not to race. Someone did not want to see me race.”

Stoner will rejoin Ducati this year where he take up the role of development rider and brand ambassador.

Next Story Anderson and Webb star in Supercross opener