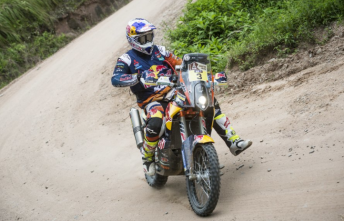 Australian rider Toby Price remains in Dakar Rally contention despite losing the overall lead after the third stage of the gruelling endurance test.

After winning the first full stage yesterday, the Red Bull KTM rider struggled to match the pace of the leaders on the run from Termas Rio Hondo to San Salvador de Jujuy, which was shortened due to heavy rain.

Price could only manage a time good enough for a 36th spot which was more than seven minutes adrift of eventual stage winner Kevin Benavides.

The Argentine inherited the stage win following a one minute penalty for on the road victor Joan Barreda Bort.

The result has dropped the Newcastle rider to ninth overall in the standings four minutes and 49 seconds adrift of leader Svitko.

“For sure, today was a good way to open the track, but you had to be really careful,” said Price.

“There were a lot of animals and a lot of people on the track today. I had a few close calls with some people.

“It was safer to back it down a little today and put ourselves in a good position for tomorrow and we’ll go from there.

“We’re only at day three now so there’s still a long way to go. Anything can happen. We’ve just got to keep ourselves situated in a good position, as close to the front as possible.

“Five or six minutes behind on day three is virtually nothing. We’ve just got to stay there during the first week and then we’ll start pushing hard during the second week.

“I’m not disappointed at all. We’re in a good position and I’m happy. We’ve done what we could and that’s where we want to be. We’re trying to make a smart race of it so we’ll see.” 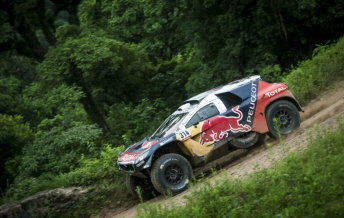 The Peugeot driver produced a blistering drive to top the times with a 1 minute and 23 second margin over his nearest challenger and team-mate Carlos Sainz, who showed signed of recovery after battling engine issues on yesterday’s test.

For the moment, for sure, I’m enjoying it. It has been two good days for me at the moment,” said Loeb.

“The car is going very well. I have a good feeling with the car.

As a result, Loeb has now raced into an overall lead of more than five minutes with Toyota driver Giniel de Villiers moving into second spot.

The South African is 12 seconds ahead of Peugeot’s Stephane Peterhansel with debutant Mikko Hirvonen in fourth for Mini.

Defending Dakar winner Nasser Al-Attiyah put the puncture disaster of stage 2 behind him by coming home in third, which has lifted him to fifth spot in the overall rankings.

The Australian entry of Peter Jerie and Dale Moscatt are lying in 39th position overall.

The Dakar Rally continues today with a 624km run from Jujuy to the Bolivian town of Uyuni.

Next Story Heimgartner not turning his back on V8S