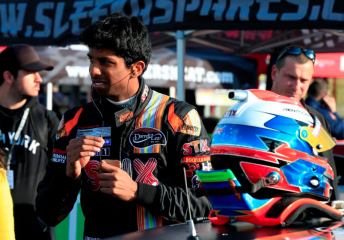 The 25-year-old is gearing up for his fourth season in the popular one make series after finishing 12th in the overall standings, driving for Team BRM last year.

Padayachee is hopeful the new surroundings of Gold Coast outfit McElrea Racing will help him rise up the rankings.

The young Australian is looking forward to increasing his skills by working alongside Warren Luff who will take on the role of driver coach.

“I have competed against McElrea Racing and its drivers for a while now and they have always been up the front,” said Padayachee.

“Andy McElrea runs a great program, especially for younger drivers, so it is great to be joining the team and benefitting from their experience with Porsche.

“Having a driver of Warren Luff’s calibre as a driver coach along with a strong engineering squad is a huge benefit, especially in a series as competitive as Carrera Cup where you’re racing against some of the best drivers in the country.

“It is also really beneficial to discuss feedback and data with someone who understands the car from a driver’s perspective.

“McElrea Racing has proven how strong its driver development program is in both Outright and Challenge classes and I am looking forward to developing my driving further with the team.”

The Porsche Carrera Cup campaign begins on the Adelaide streets at the Clipsal 500 from March 3-6.