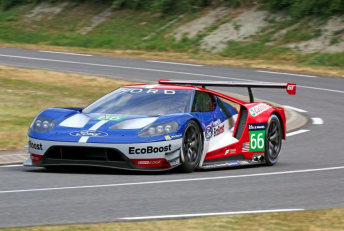 Ford has unveiled its driver line up which will compete in this year’s FIA World Endurance Championship.

The quartet will contest the full FIA WEC season including an eagerly anticipated return to the Le Mans 24 Hours 50 years on from its famous 1966 triumph at the French classic.

“To compete at this level you need the best car, the best team and the best drivers, and we have selected Stefan, Olivier, Andy and Marino to drive the Ford GT to take on the best in the world.”

Three-time world touring car champion Priaulx joins the American manufacturer after a 13-year stint at BMW and is looking forward to the prospect of racing for the blue oval.

“A new project is always exciting but for me to be driving for Ford in the WEC is just on another level,” Priaulx said.

“I can’t wait to get behind the wheel of the car and start the preparations for the season.

“Any motorsport fan will remember the iconic Ford GT40 cars of the past, and for me to be part of this program 50 years after Ford’s historic win at Le Mans is such a privilege.”

Likewise accomplished prototype racer Franchitti will switch back to the GT discipline which launched his career following success in the 2001 British GT Championship.

The exact driver pairings for both FIA WEC entries is yet-to-be confirmed.

The FIA WEC program will be run alongside a two car effort in the IMSA WeatherTech SportsCar Championship.

The entries will be piloted by Australian Ryan Briscoe, Joey Hand, Dirk Muller and Richard Westbrook.