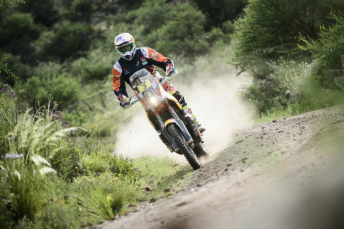 Toby Price on is way to victory on Stage 2

A comfortable victory on stage two has seen Australian rider Toby Price move into the lead of the Dakar Rally.

The Red Bull KTM rider produced a faultless run through the 354km stage from Villa Carlos Paz to Termas Rio Hondo to top the timesheet by 20 seconds.

Husqvarna’s Ruben Faria emerged as the Newcastle rider’s nearest challenger in second with Slovakian rider Sven Svitko in third a further minute back.

However, a post stage one minute penalty for Faria has seen Price’s advantage further extended.

“On this stage it’s all gone really good. It was a weird way to start the Dakar yesterday. We didn’t even get to run the course and everything got cancelled, so actually today kicked the Dakar off and getting going is unreal,” said Price.

“I got through that stage pretty clean and pretty comfortable so we’re in a good position for tomorrow.

“It should be fairly similar to what we had today and then day four is when it kicks in with a bit of hard navigation. But we’re excited and it’s good to be back here.

“For sure, we’re excited and keen to see what the day can bring. We hope we are up for the title. That’s what we’ve come to the Dakar for, to be a title contender, but you’ve got to have a perfect race go your way for the two weeks.

“Today was only pretty much day two, but realistically it’s day one, so we’ve got a long way to go. We’ve just got to make sure we keep cool, calm and collected.

“It’s good to get one stage win out of the way, but we’re looking forward to being smooth and consistent the rest of the week and see how we go.” Meanwhile, nine-time WRC champion Sebastien Loeb has shot to the lead in the car division after a comfortable victory on the stage two.

The Frenchman, on his dakar debut, was quickest through every checkpoint as he ended the run 2 minutes and 23 seconds ahead of Peugeot team-mate Stephane Peterhansel.

The victory came after Loeb encountered difficulty during the muddy conditions.

“That was quite good news at the end because I didn’t believe it,” said Loeb.

“I was stuck in the mud at the middle of the stage and was lucky to get out.

“I got stuck for maybe two minutes, something like that.

“At that moment I didn’t believe I would get out like I did.

“Finally, I managed to join the field again and resume the stage, but it was really on the limit so I was a bit afraid.

“Apart from that, I had a good stage with no problems, trying to find a good rhythm and it was OK.”

It was not a completely perfect day for Peugeot as Carlos Sainz lost more than 10 minutes with an engine issue which has dropped him outside of the overall top 10.

The Australian entry of Peter Jerie and Dale Moscatt is 36th overall.

Next Story ARMOR ALL Summer Grill: Is Hayden Paddon a future WRC champion?

Previous Story ARMOR ALL Summer Grill: Is Tekno the last chance saloon for Will Davison?