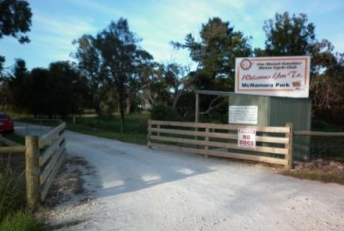 A South Australian motorcycle rider has been killed in a crash during an historic road racing event at McNamara Park near Mount Gambier.

The rider was transported to Mount Gambier hospital where he later died.

Motorcycling Australia released a statement today which confirms a full investigation into the incident in conjunction with Motorcycling South Australia is underway.

“The incident occurred at McNamara Park Road Racing Circuit in Mount Gambier, South Australia, in which seven bikes were involved in a racing incident.

“Unfortunately, one rider involved in the incident passed away, and both MA and MSA together with the promoting club – Historic Motor Cycle Racing Register SA, are assisting with the ongoing investigations that are taking place.

“Both MA and MSA would like to pass on sincere condolences to the family of the deceased rider – who have requested privacy at this time.

“MSA has arranged to provide a counseling service for anyone who has been affected by the incident.”

This is the second fatal incident at the McNamara Park track following the death of a 54-year-old rider in November.

Next Story Stoner: Marquez felt threatened by me at Honda