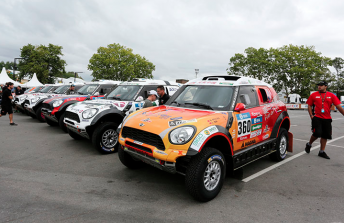 The #360 of Guo Meiling in scrutineering before the Prologue stage

The Dakar Rally prologue was halted following a crash which injured four spectators.

Individuals were hit by the X raid Mini of Chinese debutant Guo Meiling which ran off the road just 6.6km into the stage.

The prologue stage, which is new to this year’s event, was suspended to allow medical crews including four air ambulances to attend the scene.

“The organisers immediately deployed all resources available to the site of the accident: four medical helicopters, three medical vehicles belonging to the organisers and eight local ambulances,” read an official statement.

“Injured individuals are likely to be swiftly taken to hospitals in the area following an initial medical evaluation by the organisers’ medical teams on the site.”

It is unclear as to the extent of the injuries sustained by the spectators involved.

The Toyota driver clocked a time of 6 minutes and 8 seconds which proved to be three seconds quicker than double WRC champion Carlos Sainz (Peugeot) and Xavier Pons (Ford).

The Australian entry of Peter Jerie and Dale Moscatt finished in 48th spot.

“Happy to get through prologue safely in 16th position,” said Price.

“We made a small mistake in the opening section of the stage and struggled a little to recover. We really focused on completing our own prologue and putting the bike through its paces before the opening stage.”

The Dakar Rally continues today with the opening stage from Buenos Aires to Villa Carlos Paz.

Next Story ARMOR ALL Summer Grill: Will F1's show improve in 2016?

Previous Story ARMOR ALL Summer Grill: Will V8s foray into Malaysia be a success?