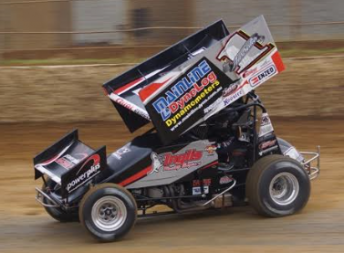 The Melbourne-based driver jumped to the lead with just three laps remaining as he took advantage of a late caution which bunched up the field.

Up until that point Veal had led every lap and was on course for the victory but had to settle for second spot with Brooke Tatnell in third.

“Following the restart I knew I had a good car and I knew it would stick if I put it in under Jamie so I just drove it in there,” said Murcott.

“I recall starting on the front row with Jamie on the New Year’s Day race here last year and we had a good go and lost out so I guess it’s good to get one over him.

Despite missing out on the round win, Veal took the Speedweek title by seven points from Tatnell.

“I guess Dave was a little smarter than I was after that restart so I will just have to work on a few things next time,” said Veal.

“But to win the overall Speedweek Championship is a credit to my team, my sponsors and my Family so I can’t thank them enough”.

The World Series Sprintcars Championship heads to Brisbane’s Archerfield Speedway for the Australian Open from January 8-9. 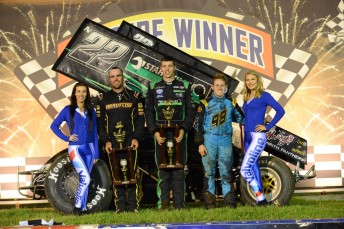 Sweet scored his third win from four starts in the night’s first feature race as he held on to take the victory from Ian Madsen with Jackson Delamont in third.

However, it was Thompson who ended the night on top by claiming an emotional maiden feature race win after 16 years of trying.

The Kellyville driver managed to fend off Sweet to take a long awaited victory.

“I can’t believe this has finally happened,” said Thompson. “I’ve been in this position so many times and never been able to finish the job, but tonight I wasn’t giving up.

“I felt the rubber build up on the low line and I had to keep telling myself not to move off it. I knew if I could stay down there he (Brad) would have trouble getting past. I can’t thank my crew enough for giving me a fantastic set up. This is a dream come true.”

NASCAR Sprint Cup race winner Kasey Kahne retired from Race 1 with an engine issue before coming back finish 11th in the final race of the night.

Donny Schatz claimed his 13th consecutive feature race win at Archerfield Speedway with another come from behind victory.

The reigning World of Outlaws champion surged into the lead from his 11th place starting berth after just 10 laps of the final. 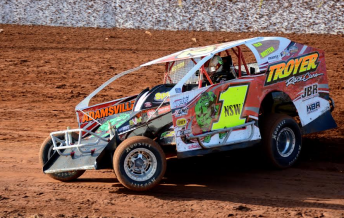 Kevin Britten on his way to the title

Once ahead the American went on to complete an emphatic victory finishing ahead of Bryan Mann, who recovered from a crash in his final heat.

Queenslander Mitchell Gee was absent from the feature race after suffering a nasty crash in the afternoon practice session.

Gee made contact with the barrier and flipped violently on the main straight. He was helped from the car by medical staff before leaving the circuit in an ambulance.

The night saw a new champion crowned in the Australian Dirt Modified Championship after Kevin Britten recorded a dominant win in the 35 lap final.