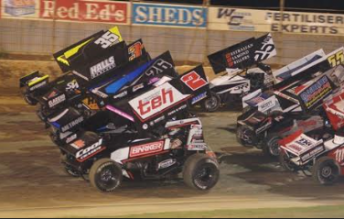 The start of Speedweek’s penultimate round at Premier Speedway

Nine-time World Series Sprintcars champion Brooke Tatnell moved to the top of the Speedweek standings with victory in the penultimate round at Warrnambool’s Premier Speedway.

Tatnell led the opening 10 laps of the feature race before being passed by Californian driver Kyle Hirst, but a tyre failure for the American with seven laps remaining put the race back in the former champion’s hands.

The Australian was unchallenged in the remaining laps as he took the chequered flag from overall championship leader Jamie Veal.

“During the early part of the race I was looking up at the big screen trying to work out if anyone was getting the bottom to work and once Kyle (Hirst) blew by me on the bottom I thought I had better get down there,” said Tatnell.

“From there it was basically a race for second until Kyle lost his right rear.

“I had a feeling the tyre was getting pretty bald as when you start losing the rubber the tyre starts to vibrate so from there I just tried to conserve what I had.”

James McFadden was seemingly on course for a podium in third before he suffered a tyre issue similar to Hirst which dropped him out of the running.

Steven Lines came through to claim the final place on the podium ahead of South Australian Luke Dillon and Australian champion Dave Murcott.

Premier Speedway will host the final round of Speedweek tonight with just 10 points separating Tatnell and Veal in the standings.

The American sprintcar ace stormed from 14th position to take the win from Brandon Rawlings and Darren Jensen.

Schatz found the early going tough as Rawlings bolted into a healthy lead from pole position.

However, a spin from Scott Doyle closed up the pack and allowed Schatz to progress into the top five by lap 10.

His charge continued with moves on Jensen and then Rawlings for the lead on lap 24.

Once in front, he proved unstoppable as he race to his 13th consecutive victory at Archerfield Speedway.

Schatz will be back in action at the Brisbane track tonight for the ninth round of the Supercheap Auto Sprintcar Track Championship.