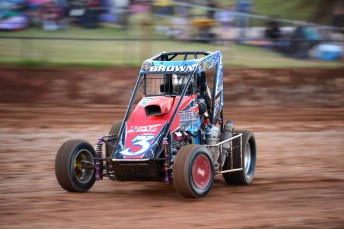 The Sydney driver was in involved in an incident with fellow racers Troy Jenkins and Braydan Willmington which resulted in all three cars flipping over on the opening lap of the Speedcar feature race.

After being attended to by medical staff, Brown, who complained of back pain, was taken to Royal North Shore Hospital for an assessment of his injuries.

A statement posted on the venue’s Facebook page this morning confirmed Brown’s injuries were not as serious as first feared although the driver will remain in hospital today for further scans and tests.

Willmington was also treated by medical staff at the circuit before he was transported to Westmead Hospital for concussion and a further assessment. The teenager has been discharged and is resting at home.

Meanwhile, Jenkins, the third driver involved in the crash, escaped his vehicle without issue following the crash.

“We are pleased and relieved to say that as of this morning Mark Brown has only suffered a broken collarbone,” read a post on Valvoline Raceway’s Facebook page.

“We say “only” with respect of course as we never want to see anyone with any injuries of any form here but certainly it could have been a lot more severe.

“Brownie still has some remaining scans and tests to be carried out today but his lovely wife Belinda certainly sounded relieved and in good spirits this morning when we spoke to her.

“Let’s hope that today is a good day for Mark. Those of us who know him well know that he’d itching to do two things (1) get outside the hospital room for ‘something’ and (2) see the crash on video.

“Get well Browndog and youngster Braydan Willmington who is at home and resting today.”

Due to the Speedway’s time curfew passing during the extrication process being carried out for Brown, the remainder of the 30-lap Speedcar Feature and the 50-lap Sprintcar Firecracker was abandoned.