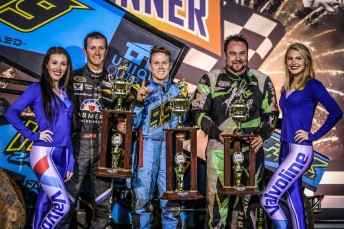 The American racer produced a faultless display to win the 35 lap A Main from NASCAR Sprint Cup driver Kasey Kahne with Kraig Kinser completing a podium lock out for North America.

Sweet’s victory helped him to the NSW championship to become the first American to win the crown since Danny Smith’s triumph in 1986.

“I’m honoured to win this race even more now,” said Sweet. “To win a race that the great Danny Smith has won thirty years ago is fantastic.”

Multiple Sprint Cup race winner Kahne was left to settle for his second runner up finish in as many races after coming through a dice with his fellow countryman Kinser.

“I feel like I’m really getting this place figured out,”said Kahne. “We had a great race going with Kraig (Kinser) for about five laps where we just ran side by side. It was a lot of fun.”

Grant Anderson was the first Australian home in fourth ahead of Darwin’s Ben Atkinson with Max Dumesny in sixth. 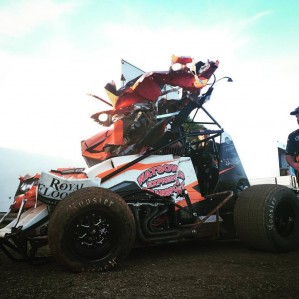 The remains of Ian Madsen’s sprintcar

The night was not without incident as Ian Madsen, Warren Ferguson and Sebastian Johnston were involved in heavy crashes.

Johnston escaped a frightening roll over in an earlier heat race just seconds before Ferguson ran into the back of Madsen, which resulted in both cars encountering a series of flips. All drivers were reported to be OK following the incident.

“I didn’t hear the call on the red light (which had come on for the Sebastian Johnston crash half a lap before) or see the red light and I guess Ian was slowing down for that reason,” said Ferguson.

“I honestly didn’t realise until it was too late. I’m really, really sorry for Ian because I didn’t mean to do that to either of us.”

James McFadden bounced back from being stripped of victory at Mount Gambier by winning the fourth round of the World Series Sprintcars Speedweek at Avalon Raceway.

McFadden produced another dominant performance as he took the victory from Kyle Hirst with Jamie Veal third and Brooke Tatnell in fourth.

The championship heads to Warnambool’s Premier Speedway for the Speedweek Grand Final held from January 1-2.