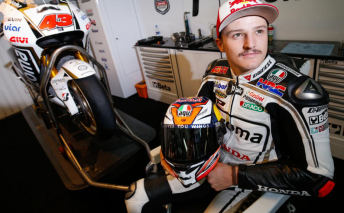 Jack Miller made the step up to MotoGP with LCR Honda

Jack Miller made the bold move to step up from Moto3 to motorcycle racing’s top tier in 2015 with LCR Honda.

After finishing as the Moto3 runner up in 2014, Miller completed a surprise move to MotoGP by signing a three-year contract with Honda that saw him secure an Open Class ride at one of the sport’s established satellite teams.

Such a leap was always going to provide a challenge for the talented Queenslander as he faced the prospect of racing against the world’s best on much more powerful machinery.

While inconsistency reigned, Miller did however produce glimpses of his potential as he recorded six points finishes with a season best of 11th at Catalunya.

Speedcafe.com’s Tom Howard caught up with Miller to discuss his maiden season in the premier class and his 2016 hopes following his move to Marc VDS Honda.

SPEEDCAFE: How do you reflect on your first year in the premier class?

JACK MILLER: It has been a difficult year but it has also been a lot of fun. We have learned so much riding against the best riders in the world.

It was a big eye opener with what we had to learn and I feel we didn’t do too bad. We were the top Open Class rider a few times. It wasn’t our best season but as far as first seasons go it wasn’t too bad.

SPEEDCAFE: What has been the biggest challenge coming from Moto3 to a MotoGP prototype bike?

MILLER: One of the big things to get used to is the power and the difference in the weight. There is so many different factors on these things. With this bike you are never really on full gas until you are right in the middle of the straight. 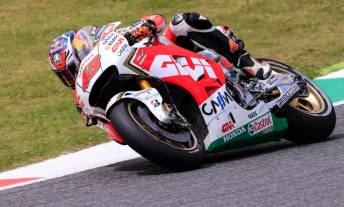 If you open up the throttle too early then you lose time through wheel spin. It throws a few more factors into it because you really have to be on your toes.

In Moto3 you wait 15 laps then push on whereas in MotoGP you are fighting all of the time. It is a whole different ball park but it is a lot of fun at the same time.

SPEEDCAFE: Do you feel that you have learned a lot from the year and were there any particular highlights?

MILLER: You are always learning every time you ride the bike. This year we were really fortunate to fight a with a few guys on the same bike like Nicky Hayden who is a former world champion. To be able to fight with him and run at the same pace as him was great and I think I can hold my head up high.

None of the season was really satisfying because you are running around in 12th and 11th you want results but it is good feeling knowing that you are beating the guys on the same machine as you. That was the goal this year.

There were moments that gave me a boost. In the dry at Phillip Island we were really fast but we just needed to work on a few other things.

SPEEDCAFE: What did to feel like to ride alongside some of your heroes that you have looked up too? 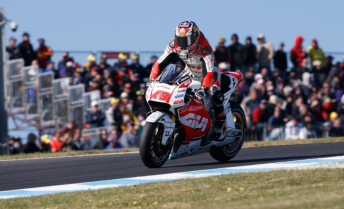 MILLER: That has been one of the coolest things (riding with people I have idolised). I think it is something I am going to remember for the rest of my life.

I got on really well with Cal Crutchlow who was my team mate this year and he took me under his wing and gave me a lot of advice.

SPEEDCAFE: In 2016 you will join Marc VDS Racing on a  full prototype bike, how are you feeling about the year ahead?

MILLER: Riding the new bike in Valencia at the test has given me a lot of motivation to keep working hard and try to be ready for the pre-season. Consistency is the next goal.

In anyone’s first year in MotoGP there are a lot of falls. We had a few this year but I think we learned from most of them.

To have  in your mind that you are on the same bike as everybody else gives you more motivation in training. When you are riding on a Open Class bike you know you can’t win the race. This is definitely one of the key points I am looking forward to a lot next year.

Marc VDS have really taken me under their wing it feels like a team environment. I’m really excited to be there. We will be on the newest machines as everybody else and if we need any parts they will spend the money. They are here to win and not to make up the numbers. 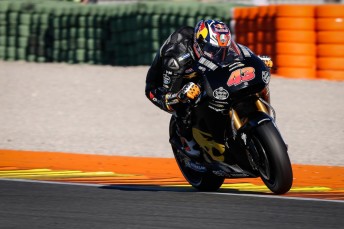 SPEEDCAFE: What targets have you set yourself in 2016?

MILLER: We haven’t really set too many targets but staying on the bike more is definitely one. We want to be fighting with the top satellite Hondas and the top satellite bikes which I feel is a reasonable objective but we are going to have work towards that.

I think the new electronics and tyres will level the playing the field a bit. I think it is going to be awesome year for the spectators especially the first few races as the riders get used to the changes.

SPEEDCAFE: Do you think there will be any animosity following the clash between Marc Marquez and Valentino Rossi in 2016?

MILLER: Everyone is just carrying on as per normal. I feel there was bad blood before but now it is out in the open.

SPEEDCAFE: Casey Stoner will join Ducati as a development rider in 2016 with a possibility of a wildcard ride, how do you think he will cope?

MILLER: It is going to be intersting we will see first how Casey will adapt going back to Ducati because it is very different to the bike he was riding in 2007 and 2008. It is going to be difficult for him at the start not riding as much for the last three years. The Ducati has changed a lot so he has got to adapt to that.