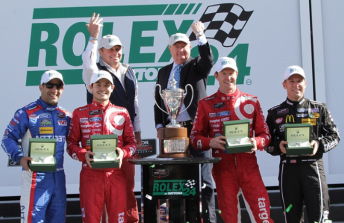 The New Zealander will team up with IndyCar stablemate Tony Kanaan and NASCAR drivers Kyle Larson and Jamie McMurray in an unchanged line up from this year’s success at the twice around the clock endurance classic.

Chip Ganassi Racing confirmed last month that it will also field two new Ford GTs alongside its prototype effort in the event which will be piloted by Australian Ryan Briscoe, Dirk Muller, Joey Hand and Richard Westbrook.

“We’re proud to have the defending Prototype Champions from last year, along with the excitement worldwide with the reintroduction of the Ford GT,” said Chip Ganassi.

“I think we’ve built a very strong effort for the 2016 race in the Prototype class, which gives us two more solid chances to get to victory lane.”

Preparations for the Daytona 24 Hours (January 30-31) will begin with the Roar Before the Rolex 24 official test held from January 8-10.