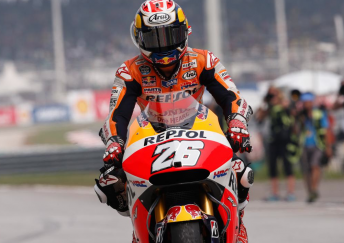 Marc Marquez believes his Honda team-mate Dani Pedrosa is the most gifted rider on the MotoGP grid.

The 22-year-old has operated alongside Pedrosa ever since he graduated to the premier class in 2013 with the double world champion overshadowing his diminutive team-mate in each of the last three seasons.

Despite recording back-to-back world championships in 2013 and 2014 while accumulating 24 wins compared to Pedrosa’s six, Marquez says the 30-year-old possesses the fastest riding style.

While Pedrosa has struggled with injuries, the Spaniard, who is yet to win the MotoGP crown, showed signs of a mini resurgence with two wins towards the end of the 2015 season.

Marquez also admits he crafted his own riding style from watching Pedrosa.

“If we talk about pure talent, Dani is the best of us all. He’s the smallest rider and he has to deal with the power of a MotoGP bike,” Marquez told Speedweek.

“Just for that, he deserves respect, and he’s very good when the track goes from being dry to wet.

“His physique has sometimes hindered him. Accidents often lead to injuries that can make him more cautious.”

“Dani showed me how to ride a MotoGP bike. You must be aggressive, take the corner and see what happens on the brakes.

“Instinctively, I would use a more rounded riding style, but Dani’s style is faster.”

Marquez and Pedrosa will return to competitive action when the season begins at Qatar’s Losail circuit from March 18-20.

Next Story Q&A: Miller on his maiden MotoGP season