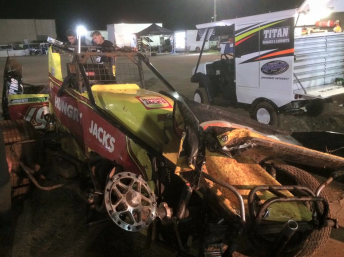 Paul Morris is set to return to sprintcar action on New Year’s Day at Archerfield Speedway after completing repairs to his damaged chassis after a heavy crash on Saturday.

The former Bathurst 1000 winner escaped injury at the Brisbane track when his sprintcar locked wheels with a competitor sparking a series of somersaults in the meeting’s final heat race.

The accident ended Morris’ evening prematurely and has forced his team to fit a new frame which should be completed in time for Friday’s Supercheap Auto Track Championship round.

“We are putting a car together now which should be ready for Friday night,” Morris told Speedcafe.com.

“We are fitting a new frame. It is not a big deal, it is probably the cheapest part of the car.

“It is just a matter of time before it is going to be you when you race those cars on those tracks, they are open wheel cars so it happens quite a bit.”

Despite the incident, Morris is enjoying the opportunity to race against the world’s best in Donny Schatz and is looking forward to the prestigious Australian Open round at Archerfield from January 8-9.

“It is awesome fun. It is proper racing and the best guys win,” added Morris.

“We will do as many races as we can. I believe there is another five races between now and January 8.

“The Australian Open is pretty big. It attracts some drivers from down south so there will be some pretty good cars in town for that one.”