The former World Series Sprintcars champion initially found himself behind the 17-time NASCAR Sprint Cup race winner before finding a way through to the lead on lap four.

Once in front Farr opened up a lead but he was unable to relax as a hard charging Kahne closed the gap in the final laps to set up a grandstand finish.

Despite Kahne’s late charge, Farr was able to hold on to take his 39th win at the venue, while Ian Madsen claimed the final place on the podium.

The race was played out in front of a bumper crowd which included Kahne’s former team-mate and four-time NASCAR champion Jeff Gordon. 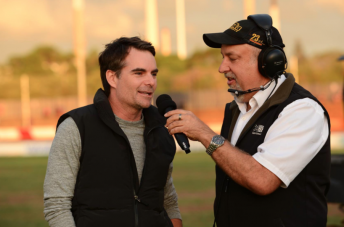 “This is great to get a finish like this early in our campaign and it was really cool to have Jeff (Gordon) here to see it,” said Kahne.

“I’m glad he could come out and get some Sprintcar action in during his Australian holiday and I’m really pleased for my guys working so hard on this car.”

The racing was however marred by two heavy crashes for Max Johnston and Kraig Kinser, with the former lucky to escape serious injury after a collision with the barrier which destroyed his Flair Dancewear #38 entry.

Despite suffering a flip in qualifying, Kinser was able to rebuild his car and progress through the A Main. Brooke Tatnell took the win in the second round of Speedweek at Borderline Speedway.

Brooke Tatnell scored a controversial victory in the second round of the World Series Sprintcars Speedweek at Mount Gambier’s Borderline Speedway.

The nine-time champion initially crossed the finish line in second but was promoted to the top step of the podium after on the road winner James McFadden was judged to have made an infield pass.

“I have been on both ends of that call in the past and I really feel for the Chief Steward and his team for having to make that call,” said Tatnell.

“I would be the first to say that it was a clean pass or not but to be honest I really don’t know.

“It is one of those situations where if we had tyres or something like that down there it wouldn’t be an issue but having said that I can’t take anything away from my guys who gave me a great car that allowed me to contend for the win.”

The competition continues on Wednesday night with a visit to Lara’s Avalon Raceway.

Meanwhile, World of Outlaws champion Donny Schatz notched up his second win of his Australian tour with an impressive come from behind victory at Brisbane’s Archerfield Speedway.

The American star fought his way through from 14th position after electing to take up the challenge of inverting the order of the first 14 cars for the feature race after winning the Lucas Oils Dash.

Schatz once again showcased his skills to power to the front eventually taking the lead on the lap 34 from Bryan Mann.

Mann produced a strong drive throughout having leapt into the lead, after starting from 11th, on lap 20 and appeared to have the measure of the charging Schatz.

However, Mann was unable to hang on leaving him to settle for second with Mitchell Gee coming home in third.