Speedcafe.com takes a look back at the biggest talking points from the 2015 V8 Supercars Championship.

Delivered in two parts, this list focusses on the key topics that shaped the season. Gracie and De Silvestro with their Prodrive-run Bathurst entry

The first all female pairing to drive in the Bathurst 1000 since 1998 was always going to garner a significant share of the pre-event attention.

Pairing Dunlop Series runner Renee Gracie with an international star in Simona de Silvestro, adding a blue chip sponsor and tagging the entry ‘Supergirls’ made it a major national story.

Eager to see a female enter the category full-time by 2017, V8 Supercars played a roll in putting the entry together and later made headlines by slamming David Reynolds with a $25,000 fine for a ‘sexist’ comment in the Thursday press conference.

An early crash for Gracie in the race ended any hope of a strong result, but a quick-fire repair at least ensured the duo were able to gain plenty of miles ahead of a planned return in 2016. Five V8 Supercars drivers put on a show in KL

For the first time since 2013, V8 Supercars ventured outside of Australasia for a five-car demonstration at the inaugural KL City GP in Malaysia.

A prelude to a full championship event next season, the move proved an eye-opener for locals and teams alike, with the V8s proving spectacular on the extremely narrow, fast and bumpy street course.

Despite a succession of failed international sojourns, there remains an undercurrent of optimism about an expansion into Asia, which can put the championship under the noses of regional sponsorship decision makers.

Construction and road closure issues on Friday made for an auspicious start as more than half of the opening the day’s running was lost, serving to emphasise just how well the complex street events are run in Australia. 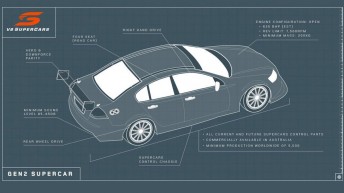 V8 Supercars put together a theoretical outline for its Gen2 regs

Having been launched to the public last December ahead of a planned 2017 introduction, Gen2 was always going to be a major project for V8 Supercars’ technical department this season.

A set of technical guidelines were delivered to teams on schedule in June, but a promised track debut for a V8 Supercars-developed V6 turbo engine was postponed to 2016.

Interest from non-competing manufacturers has so far proven mild at best, with much hype created around Lexus before it officially declared a preference to explore GT3 options in September.

That leaves the focus on the existing players as Nissan, Holden and Volvo weigh up their spends in the sport and Ford maintains it is out. 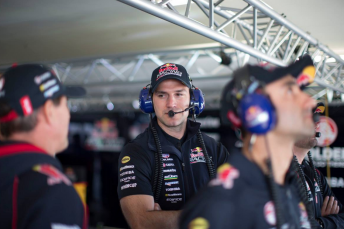 Coming off four consecutive drivers’ titles, Red Bull and Jamie Whincup didn’t take kindly to the beating they took early in the season from Prodrive.

The circuit breaker was pulled following a particularly tough Hidden Valley event in June, with team manager Mark Dutton put back on Jamie Whincup’s car in place of David Cauchi.

Three events later in Sydney Whincup was finally back at the top of the podium, while from Sandown onwards the #1 Holden was setting the pace on a regular basis.

Cauchi was moved back into the race engineer role in time for Pukekohe and, with a run of nine podiums to end the season, the six-time champion asserted himself as an early favourite for the 2016 title. The early season form of Prodrive Racing Australia’s new FG X Falcon had some corners of the paddock screaming blue murder by mid-season.

From April through September, Prodrive’s new Fords enjoyed a spell of 15 wins from 18 races that included seven one-two finishes.

Unrest, particularly from key Holden squads, triggered a July parity review from V8 Supercars’ technical department, which moved to reassure teams that the pre-season aero homologations had been correctly undertaken.

Red Bull, whose technical director Ludo Lacroix was responsible for an off-season tweak to the Holden’s aero package, was notably quiet on the subject and subsequently silenced the parity debate with a storming second half of the season. Dunlop helped V8 Supercars out of a spot of trouble

V8 Supercars was forced to make two in-season changes to its tyre formats following a barrage of criticism early in the season.

The Saturday sprints, which were cut from 120km to 60km for the new year, proved processional at Symmons, Perth and Winton, triggering the injection of soft tyres for the second heat from Darwin onwards.

A pre-season cut to the overall tyre allocation, designed to save teams money, meanwhile left drivers with dwindling stocks to practice on at subsequent events and saw an extra set added for Friday-only from Winton.

While policy on the run is often criticised, both decisions appeared sensible solutions that ultimately benefited the show. Full credit must go to Dunlop for their swift efforts to provide the ‘rescue packages’.

Stay tuned to Speedcafe.com tomorrow for a look at the year’s top five topics.

Next Story ARMOR ALL Summer Grill: Will new driver signings lift BJR in 2016?

Previous Story ARMOR ALL Summer Grill: What does the future hold for Super Black Racing?