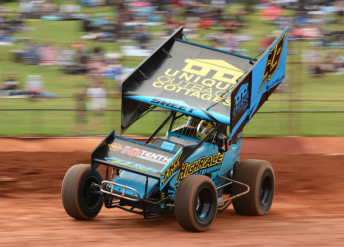 Lapped traffic threatened to hamper Sweet’s run to victory although a series of calculated moves saw him march to the chequered flag from Sydney’s James Thompson, with Robbie Farr in third.

“Man that track was challenging, which kinda made it fun,” said Sweet.

“I was so busy in lapped traffic and had to work really hard to make my moves count and my lines stick at times.

“Some parts of the track were real grippy and others real slick so you had to be on your game.”

NASCAR Sprint Cup star Kasey Kahne was among the retirements from the 35 lap feature race.

The multiple Sprint Cup race winner had to half spin to miss the stricken Warren Ferguson and unfortunately damaged the front of his car which prevented him from taking the restart.

The two-time champion from Queensland leapt into the lead at the start and never looked back for the 35 lap journey despite a late restart with seven laps remaining. 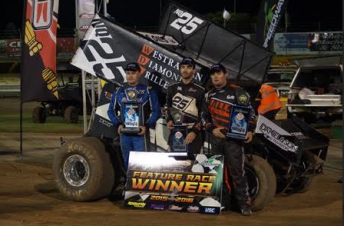 James McFadden celebrates his victory in the opening race of Speedweek

“Every year I always find a way to lose this race and when the caution came on I thought it could happen again,” said McFadden.

“I had no idea where the other guys were running but I was really able to put my car anywhere on the track.

“I can’t thank my guys enough for giving me a great car tonight and it is a great way to build momentum for the rest of the week.”

Veal continues to top the standings with a nine point lead over Lines ahead of tonight’s visit to Mount Gambier.

Jamie Maiolo claimed his third feature race win of the season with victory in the eighth round of the AHG Sprintcar Series at Bunbury Speedway.

Maiolo, who started from second, survived a late race challenge from Jason Kendrick to take the chequered flag with Shaun Bradford coming home in third.

The series heads to Perth Motorplex for the ninth round on Saturday.

The seventh round of the Supercheap Auto Track Championship at Archerfield Speedway was postponed to tonight due to heavy rain.