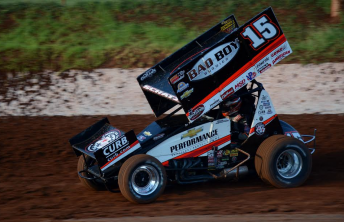 World of Outlaws champion Donny Schatz kicked off his Australian tour with a victory in round six of the Supercheap Auto Sprintcar Track Championship at Brisbane’s Archerfield Speedway.

The American sprintcar ace was made to work hard for his feature race victory with Luke Oldfield providing a challenge in the early stages.

Oldfield led the opening 10 laps before Schatz powered through from fourth to take the lead.

However, Oldfield refused to give up as the local racer regained the advantage on lap 18 with a slick move on Schatz.

Schatz wasted little time in responding to the move with the seven-time world champion sliding into the lead at the start of the following lap.

Once ahead he started to open up a lead on Oldfield before the race was halted on lap 26.

Oldfield’s hopes of victory were dented when a slow restart saw him lose second spot to Andrew Scheuerle.

At the front there proved to be no stopping Schatz who took the victory from Scheuerle, with Oldfield left to settle for fourth behind Kevin Titman.

Former V8 Supercar driver Paul Morris missed the feature the race after suffering a heavy crash in the final heat race of the evening.

The Queenslander was caught up in a five car accident that saw him encounter a series of somersaults at Turn 3.

David Priolo claimed the seventh round of the AHG Sprintcar Series at Perth Motorplex.

In the end, Priolo took the chequered flag from Bradley Maiolo and Jason Kendrick.

Quit Bunbury Speedway will host the eighth round of the series tonight.

Meanwhile, the scheduled Boxing Day Australian Sprintcar Grand Prix at Valvoline Raceway has been moved to tonight after rain forced a postponement.