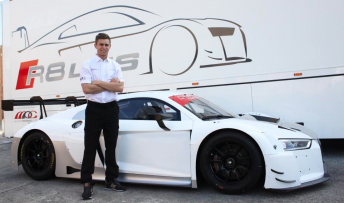 The New Zealander will share a new specification R8 with Canberra brothers James and Theo Koundouris in the Australian GT Championship and the new-for-2016 Australian Endurance Championship.

Heimgartner has been keen to expand his GT horizons after losing his main game V8 Supercars seat at Super Black Racing to fellow countryman Chris Pither next season .

The 20-year-old from Auckland made two appearances in the Australian GT Championship this year driving alongside Simon Ellingham in the Fastway Couriers Porsche at the Phillip Island and Highlands 101 events.

“I’m excited to be driving the latest spec Audi R8 in the 2016 Australian GT Championship and I’m definitely going to be pushing hard for the title,” said Heimgartner.

“Being a Pro-Am Championship, I’m looking forward to working with the Koundouris brothers and the guys at MPC.”

Jame Koundouris believes the acquisition of Heimgartner will allow the team to challenge for the Australian GT Championship next season.

“The Supabarn team has finished second and third in the GT championship in previous years plus Theo finished third this year in Trophy class so with the addition of Andre’s talent, hopefully we can fill the top spot in 2016,” said James Koundouris.

“One of us will join Andre in the sprint rounds and the other in the endurance rounds.”

The Australian GT Championship begins at the Clipsal 500 from March 3-6.

Previous Story ARMOR ALL Summer Grill: Can McLaughlin and Moffat push Volvo to the front?