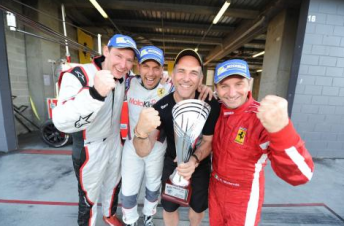 The Australian squad has confirmed its driver line up for the February 5-7 Mount Panorama classic which will see Montermini, Simonsen and Australian Renato Loberto return behind the wheel of the Ferrari 458 GT3.

The only change to the squad sees car owner Tony DeFelice included on the driver roster after electing to sit out this year’s race to manage the team.

After missing both qualifying sessions due to a mechanical issue, the squad fought from 50th on the grid to finish sixth outright and claim second in the GT3 amateur class.

Montermini will once again bring a wealth of experience to the squad having made 20 Formula 1 starts before forging a career as a Ferrari GT specialist.

The 51-year-old has already set his sights on repeating the impressive podium scored at the year’s race.

“It is an honour to be confirmed as part of the Vicious Rumour Racing team in the prestigious Bathurst 12 Hour,” said Montermini.

“Mount Panorama is a wonderful circuit, and very hard. One of the most difficult in the world.

“It is fantastic to be with my teammates again, Renato, Benny, and this year be joined by our team owner, Tony, whom I wish to thank for the amazing opportunity. We aim to repeat the podium of this year.

“We know there will be great competitors from all over the world, but we are working hard and we want to be on top.”

After impressing on his event debut this year, Simonsen, the brother of the late Allan Simonsen, has earned a recall with the Dane labelling the drive as a ‘dream’ opportunity.

“The Bathurst 12 Hour is one of the best GT events out there, and the track is the best in the world for me,” said Simonsen.

“So to be racing a Ferrari around the best race track in the world is every drivers dream, and we will push hard to go one better than this year, and take the top step this time.”

Next Story ARMOR ALL Summer Grill: Can McLaughlin and Moffat push Volvo to the front?

Previous Story ARMOR ALL Summer Grill: Will Triple Eight be the team to beat in 2016?