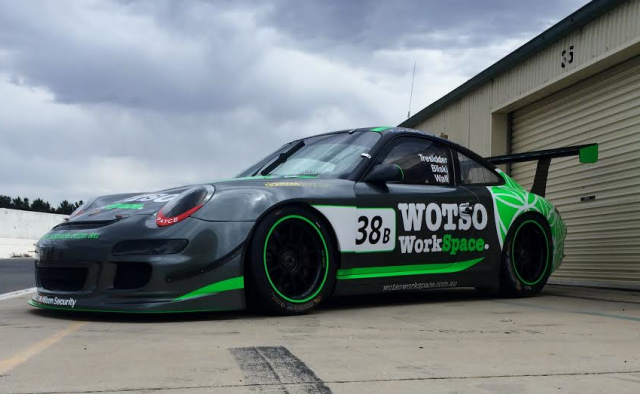 The #38 Porsche David Wall, Daniel Bilski and Paul Tresidder will campaign at the Bathurst 12 Hour

The trio will pilot the #38 Porsche Cup S in the Class B category which will feature Wall’s 2015 V8 Supercars team-mate Scott McLaughlin, who is part of the Grove Racing squad.

Confirmation of the outfit’s Bathurst line up comes shortly after Wall confirmed plans to return to the Porsche Carrera Cup next season.

Tresidder’s inclusion in the Bathurst campaign will see his long standing partnership with Wall continue with the former eagerly anticipating the Mount Panorama endurance, held from February 5-7.

“I have raced at Bathurst before and I am very excited to be back again with Wall Racing,” said Tresidder.

“It is one of the greatest challenges for any driver or team – we saw how easily it can come undone last year – but I am positive we will go there in the best shape for the 2016 race.

“We have a strong driver line up, and an experienced team, so it is all shaping up for a solid shot at Class B. We are going there to give it everything we have and hope to do well.”

The team has unfinished business at the mountain after a heavy accident ruled them out of the event before the race start.