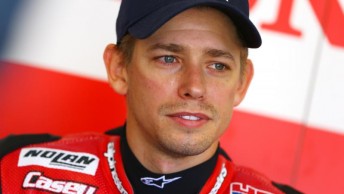 Ducati boss Claudio Domenicali says the manufacturer does not intend to hand Casey Stoner a wildcard ride in the 2016 MotoGP World Championship.

Speculation regarding a possible competitive MotoGP comeback for the two-time world champion has been growing since Stoner inked a move back to the Italian marque as a test rider last month.

Stoner retired from MotoGP at the end 2012 although this year the Australian made his two wheel racing return at the Suzuka 8 Hours and was in contention to replace injured Honda MotoGP rider Dani Pedrosa.

The Australian competed for Ducati from 2007-2010 winning the world title in his first year at the team.

While joining Ducati could offer Stoner an opportunity to make a return, the manufacturer’s CEO says the 30-year-old is focused on developing the bike for riders Andrea Dovizioso and Andrea Iannone.

“There were some hard times, as in any family, but we have not forgotten what has been for Ducati,” said Domenicali in an interview with Gazzetta dello Sport.

“Casey has a lot of experience, he has matured a lot.

“He seems interested, focused, dedicated. He wants to apply his knowledge to ensure that the two Andreas have the best bike possible.

“Things are clear between us for now – (wildcards) are not in our plans or his.”

Although a wildcard ride appears unlikely, newly crowned world champion Jorge Lorenzo is hopeful Stoner will join him on the grid next year.

“I thought last year he would be out in a race, but at the end, due to circumstances, he wasn’t,” Lorenzo told MotoGP.com.

“He will want to go out on Phillip Island or some other tracks, surely we will see him fighting with us, I think for victory.

“I have seen very few, if any, riders with the natural talent of Casey, to be fast right away with any bike and in all weather conditions.

“It would be great news for everyone if Casey were to decide to come compete again.

“MotoGP is very difficult, many riders are fighting for victory, but having Casey back would be amazing. Hopefully he decides to return.”