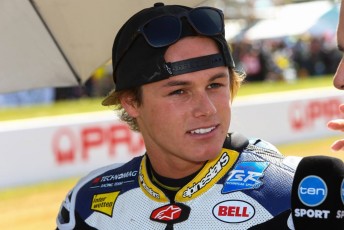 Australian motorcycle rider Josh Hook will step up to the World Superbike Championship next season with Grillini Kawasaki.

The 22-year-old has signed a one-year deal with the Italian squad which will see him race alongside young Swiss rider Dominic Schmitter.

Hook has been steadily climbing the motorcycle ranks having contested races in the Japanese Superbike Championship and Moto2 this year.

The young Aussie also starred at the Suzuka 8 Hours when he combined with Dominique Aegerter and Kyle Smith to finish second in the prestigious endurance race.

“It’s an amazing opportunity and I can’t thank Grillini Racing Team enough for making it possible,” wrote Hook on his Facebook page.

“It’s a new machine, championship and team for me but I’m looking forward to the challenge and I’m sure we can make good results with this package.”

Hook is the latest Australian rider to join the series after Josh Brookes confirmed his plans to move to the category with the Milwaukee BMW outfit.

The 2016 World Superbike Championship begins at Phillip Island from February 26-28.