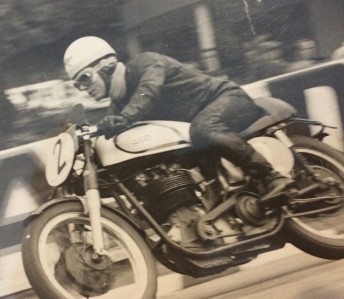 Hinton had been in full-time care previously after suffering Parkinson’s disease and the effects of a stroke.

It was the start of a nine-year international career during which time he won the 1959 500cc Czech Grand Prix at Brno.

Hinton returned to Australia in 1969 and continued to compete domestically until the early 1970’s.

He later helped prepare winning machines for his younger brother Robert and his sons Peter and Tony.

Prior to his illness Hinton, and his wife of 56 years, Kathleen, had lived in the Sydney suburb of Baulkham Hills for 40 years.

He is survived by brother Robert, wife Kathleen, sons Peter and Tony and 4 grandchildren.

Funeral details have not yet been finalised.

Speedcafe.com extends its sympathy to Hinton’s family and friends.