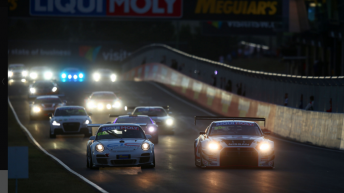 A total of 47 cars are included across the four classes, marking a decrease on this year’s event which saw 55 cars entered by the cut-off.

Reigning winners Nissan head a group of works teams which include Bentley and McLaren which, as revealed by Speedcafe.com earlier today, will collaborate with V8 Supercars squad Tekno Autosports.

The total GT3 entries decrease by just two, however, thanks to a selection of new faces.

In addition to McLaren, German squad MISHUMOTORS is a new entry to the grid, fielding a single Mercedes SLS AMG GT3.

Australian squad Performance Parts & Engineering and a Superbarn Supermarkets backed entry are also listed in Class A, albeit without confirmed vehicles.

While full driver line-ups for the all entries are yet to be confirmed, V8 Supercars will be well represented with six drivers already announced for the race.

Craig Lowndes and Garth Tander will team up in a new Melbourne Performance Centre Audi R8, while Tim Slade will race an Objective Racing McLaren 650S.

The Bathurst 12 Hour will host the opening round of the new SRO Intercontinental GT Challenge series which will see GT3 manufacturers compete for honours in four endurance races.

Next Story Van Gisbergen and Davison confirmed for B12H

Previous Story McLaren and Tekno team up for Bathurst