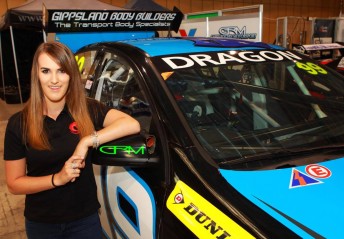 Chelsea Angelo says she isn’t underestimating the challenge of stepping to the Dunlop Series next year after confirming plans to contest the full 2016 season.

The 19-year-old has completed a deal to race a Dragon Motorsport owned Garry Rogers Motorsport Holden Commodore, which was campaigned by James Golding in this year’s series.

Golding is set to step into one of Dragon’s two GRM-built Car of the Future Holdens next year.

Angelo is no stranger to Dunlop Series machinery after making her debut in the category at the 2015 Clipsal 500, before spending the majority of the year on the sidelines due to budget constraits.

“I have been working hard to get into the Dunlop Series for a long time and I’m just so grateful to Dragon and everyone involved for giving me this great opportunity,” said Angelo.

“I certainly don’t underestimate the challenge ahead.

“Joining the V8 Supercars Dunlop Series on a full-time basis will be a big step up, but I feel that I have taken the right steps throughout my career and working with such a professional team will put me in good stead for a positive year in 2016.”