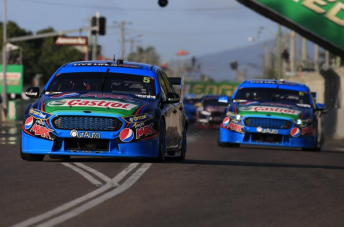 Prodrive Racing Australia has confirmed its driver line-up for next year’s Dunlop Series, where it will expand to field a pair of FG X Falcons.

The squad has signed experienced Dunlop Series campaigners Jack Le Brocq and Garry Jacobson to drive the cars, which proved the pace-setting package for much of this year’s V8 Supercars Championship.

Prodrive team principal Tim Edwards says that the pair of 23-year-olds have the potential to follow in the footsteps of Chaz Mostert and Cameron Waters, who have both come through the second-tier with the team over the last four years.

Waters wrapped up the title at Sydney earlier this month and is expected to join Prodrive’s four-car main series team alongside Mostert, Mark Winterbottom and Chris Pither next season.

“Both Jack and Garry have a great amount of potential and are both very excited to jump in the FG X next year,” said Edwards.

“It’s exciting to be able to develop our program further and the FG X was the next obvious progression and aligning the cars with the main series program just makes sense really.

“We have proven our Dunlop Series program works through the progress that both Chaz (Mostert) and Cam (Waters) have made.

“We can see potential in both Jack and Garry so hopefully we can enhance their talent and get them to the same point.”

Entering his third Dunlop Series season, the combination of Le Brocq and a Prodrive FG X looms as a formidable title challenger.

“That car has looked really strong in the main game this year and of course won the championship so it’ll be good to get in it and have a crack,” he said.

“I’ve been racing a PRA-built FG this year which will hopefully make the transition to the FG X a bit.”

Jacobson also has three seasons of experience to draw from and is determined to make the most of the opportunity ahead.

“I’ve had a good year this year but next year will be completely different now,” he said.

“The car will be quite different so that will take some getting used to but I’m really looking forward to it.”

The 2016 Dunlop Series kicks off at the Clipsal 500 Adelaide in March.

Next Story McLaren and Tekno team up for Bathurst