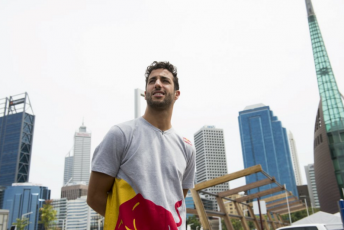 The four-time championship winning squad went without a victory in 2015 as it battled with an uncompetitive Renault engine.

A three-time race winner on the way to third in the 2014 standings, Ricciardo slumped to eighth this year.

Adding insult the injury, a succession of engine related grid penalties saw the West Aussie edged by team-mate Daniil Kvyat in the championship.

Although the misfortune pushed the typically smiling 26-year-old’s patience to extremes, Ricciardo says he can be happy with his own performances.

“I honestly look back on the season with a smile,” said Ricciardo, now back in Australia relaxing for the first time since January.

“Sure, it had some frustrations at times, but there were still some positives.

“I think the one thing I’m really happy with is that I learnt a lot from the season.

“I think the point you stop learning is the point where you start to get a little bit worried.

“I’m still young and feel like I’ve got a lot to learn and achieve in the sport.

“Some of the harder times, I took a lot out of those.”

After months of uncertainty, Red Bull confirmed earlier this month that it will continue to run Renault engines in 2016, rebadged as TAG Heuer.

Ricciardo is realistic about where the team sits in the pecking order, but is optimistic that he can return to the top of the dais at some point in the new season.

“Mercedes will still be the team to beat, I’m sure of that,” he said.

“Ferrari will be interesting. They made a big step this year and if they could make another step like that then they’ll be in good shape to fight with Mercedes.

“Hopefully we can find a few more occasions to battle them.

“The target for ’16 is to get more podiums and get a win at least.

“I missed that win this year, so to at least get one next year will be a good start.”

Ricciardo meanwhile says he’ll be relishing the challenge from within his own garage as Kvyat continues his development curve.

Replacing Sebastian Vettel this year after just a single season at Toro Rosso, the 21-year-old’s campaign was highlighted a maiden podium at the Hungarian Grand Prix in August.

Ricciardo won the qualifying battle 12:7 against Kvyat, who ended up three points ahead of the Australian in the final standings.

“It started a bit slow but he picked himself up well and then maintained that,” said Ricciardo of his team-mate.

“He started to get more comfortable in the team and felt a bit more established I’d say.

“Another challenge for me, but I’m looking forward to that.

“I know that if I put in the off-season I need and have my head in the right space, which 99.9 percent of the time it is, I think it’s going to be a fun season.”