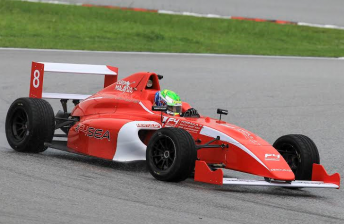 The Western Australian cut laps behind the wheel of the French built Mygale F4 car at the Malaysian circuit just a day after wrapping up the AsiaCup Super 6 title.

Love, who made appearances in the CAMS Jayco Australian Formula 4 Championship this season, is among a number of drivers expected to join the new series next year.

“I feel privileged to have been given the opportunity to do the F4 SEA test programme, which was great especially yesterday,” said Love.

“After the preview ceremony of the Formula 4 South East Asia Championship, the promoters of the new championship, Asian Autosport Action Group or Triple A gave me the possibility to do a shakedown test and complete three laps on the track with the car.”

South East Asia is the latest region to adopt FIA Formula 4 with the Peter Thompson run AsiaCup Series upgrading its championship and cars to the format with support from the Automobile Association of Malaysia (AAM).

The series will run the same Mygale chassis utilised in the Australian and British championships powered by a yet-to-be confirmed engine.

Following the guise of the AsiaCup Series, the championship will be run centrally by Thompson’s Meritus GP operation in a bid to keep costs down.

Scheduled to begin in July, there are plans for the series to feature on the bill at the Malaysian Formula 1 Grand Prix alongside the already confirmed KL City GP, held in the heart of Kuala Lumpur from August 12-14.

The price includes the lease of the car, vehicle preparation, entry and driver registration fees, slick tyres, the use of an engineer and a driver coach. Crash damage and wet tyres are excluded.

Drivers will also have access to all data as part of the championship’s open data policy which is designed to aid driver development.

Thompson believes he has created the most cost effective way of competing in Formula 4.

“Formula motorsport in Asia has never really been strong. The income here is not the same as Europe and Australia,” Thompson told Speedcafe.com.

“We have removed that gap with the launch of AsiaCup and now Formula 4.

“We already have three years of running the AsiaCup in this (centrally run) concept and its been a huge success.

“One of the huge advantages of our system is all drivers have access to all data so no matter who you are you can see how the another a driver is going quicker.

“I’m not saying that our system is the best in the world and I’m not denying being with a single team that has one of two drivers has a lot of benefits but today the problem is money and we are half the price of England and Germany.

“But I don’t believe the quality of our service is half less. If you look at all the drivers that have come through AsiaCup that have won races proves that what we are doing has merit.”

Formula 4 organisers are aiming to field a 15 car grid with six already confirmed for its inaugural season.

Next Story Jaguar and Williams team up for Formula E entry