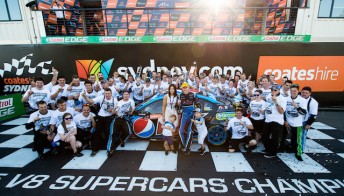 Prodrive Racing Australia enjoyed a signature season in 2015, claiming the drivers’ title in a breakthrough year for the Melbourne squad.

PRA hit the ground running at the start of the year and continued its blistering form until a mid-to-late season fightback from Red Bull, which ended the year setting the pace.

Mark Winterbottom was still the class of the field over the balance of the season, ending his title winning campaign with a class high nine wins.

There are plenty of signs, however, that next season will be more than just a two-horse race as rivals take aim at the front-runners

The Holden Racing Team is promising a reenergised two-car campaign as it continues its quest to end a long championship drought.

Fellow factory squads Volvo and Nissan are also looking to build on positive signs shown towards the end of this season, while emerging force DJR Team Penske is expected to be stronger with its expanded line-up.

Which team will stage the stiffest challenge to Winterbottom and PRA next season? Vote now on this week’s Pirtek Poll.

Next Story POLL: What is your favourite national category?

Previous Story POLL: Who is your favourite V8 Supercars driver?