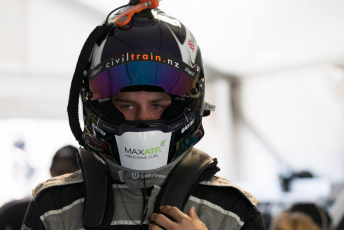 Andre Heimgartner has emerged as the front-runner for the second seat at Lucas Dumbrell Motorsport next season.

The Kiwi is one of several still in discussions with LDM to replace Tim Blanchard, who along with family owned sponsor Cooldrive will switch to Brad Jones Racing for 2016.

Heimgartner had enjoyed a promising rookie season at Super Black Racing before being replaced by countryman Chris Pither with two events remaining.

The move came amid a deal between Super Black, Pither and sponsor Ice Break for the Dunlop Series driver to take over the car full-time in 2016.

Heimgartner has been working on his own budget and is thought to be the strongest placed of those left in a market that also includes his co-driver Ant Pedersen and Erebus driver Ash Walsh.

The LDM drive and Walsh’s current seat at Erebus are the only uncertainties remaining among the 2016 grid following a busy silly season.

Dumbrell told Speedafe.com that he’s been impressed by 20-year-old Heimgartner’s efforts this season, but is in no rush to sign a deal.

“Heimgartner is in the mix, but nothing is done,” Dumbrell told Speedcafe.com.

“There’s a lot of guys out there and there’s still plenty of time to sort it out. We’ll just do it when it’s convenient.”

Inconsistent performances, however, ensured he was just 23rd in the standings after his final race of the season at Pukekohe. 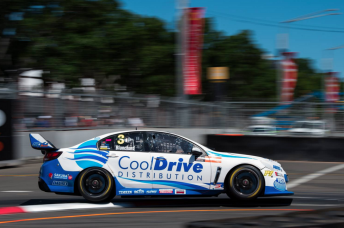 Blanchard and CoolDrive have departed LDM, headed for BJR

“I think there were some times where he got roughed up a bit in the races and he learnt how tough it is pretty quickly.

“He did a good job. His car was clearly a rocket ship, but you still have to drive it and as a first year driver he scored some solid results.

“Ideally, he’d be great to put in the car, but it’s obviously a commercial decision as well.

“That’s not just the case for our team.

“It’s tough at the moment and almost every driver in this category now is tied to sponsorship in some way.”

In addition to locking down a team-mate for star driver Nick Percat, Dumbrell is also working to improve his team’s technical package for the new season.

Discussions continue to take place with KRE, which has been the long-time supplier to Triple Eight and Tekno Autosports.

“It’s not done, but we’re talking,” said Dumbrell of a potential KRE deal.

“There’s a couple of different options and we’re working out costs and feasbility.”

Dumbrell also hopes to roll out a brand new Triple Eight-built car early next year, but admits it may not come online until after the opening event.

The three cars currently in the team’s fleet were all built by Triple Eight as part of its original batch of Car of the Future chassis ahead of the 2013 season.

“T8 obviously help us out already and we’re looking to spend a bit more with them,” said Dumbrell.

“We’ll ideally get another car off them for the start of the season, but they’ve got their own build plans to consider.”

LDM recently announced an expansion into the Dunlop Series next year, where it will field Alex Rullo, while it is also preparing Peter Rullo’s Lamborghini for an assault on the Bathurst 12 Hours.