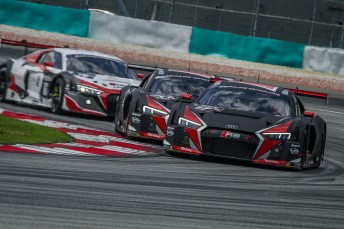 After suffering two lengthy stoppages due to heavy rain, the Belgian emerged victorious after he took the lead from Australian GT champion Chris Mies in the sister WRT Audi entry in the final hour following a thrilling dice.

In the end, Vanthoor, making his competitive return after suffering a double fracture to his hip in October, helped WRT complete 228 laps to take the win by 8.3s.

The Belgian was joined on the podium by co-drivers Stephane Ortelli and Stuart Leonard.

Team WRT completed a one-two with the Mies/Chrtistopher Hasse/Enzo Ide coming a close seocnd, while the Phoenix Racing Audi R8 of Markus Winkelhock/Nicki Thiim/Nikolaus Mayr-Melnhof were a minute behind in third.

“With that, we’re closing a very successful first season of the new Audi R8 LMS with a dream result before our customers will be battling for success on four continents with a total of up to 50 Audi GT3 sports cars next year.”

The FFF Racing McLaren 650S of Alvaro Parente/Andrea Caldarelli/Andrew Watson/Hiroshi Hamaguchi were a lap adrift of the leaders in fourth.

Bentley Motorsport’s #8 entry of Maxi Buhk,AndySoucek and Maxime Soulet was two laps down in fifth. 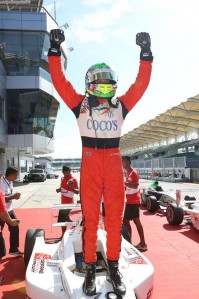 The CPK Racing Porsche squad, which included John Martin, could only complete 54 laps.

The Western Australian dominated the weekend with the only black mark on his perfect run arriving in Race 3 when a mechanical issue saw him retire on the formation lap.

However, Love bounced back to take wins in the remaining three races to take his tally to 15 from the 18 races held.