Steven Richards’ deal to spearhead BMW Australia’s factory GT3 effort has reunited one of the region’s most celebrated racing families with the famous German brand.

The 43-year-old will prepare and drive a works M6 GT3 from next season as part of an agreement for Steven Richards Motorsport to become the official customer support outfit for the marque in Australia.

The success came during a six year period for Richards with BMW, which included a second ATCC title aboard an E30 M3 in 1987.

The legend has watched his son rebound from the disappointment of losing his full-time V8 Supercars drive at the end of 2011.

Steven has since built SRM into a championship winning Carrera Cup team while also scoring two Bathurst 1000 victories in the last three years as a co-driver.

“I am very proud,” seven-time Bathurst winner Richards told Speedcafe.com at the launch. 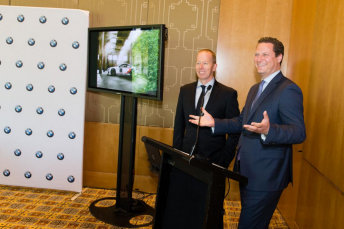 “If you’re a V8 Supercar driver that wants to stay in motor racing, there’s no clear path once your full-time career comes to an end.

“You’ve got to reinvent yourself really. I did it and now Steve’s done it and he’s put a lot of hard work in along the way.

“This deal is fantastic. The GT series has gone from strength to strength and with BMW coming into it, it’s only going to move further forward.”

The Richards family history with BMW is not lost on current CEO Marc Werner, who hopes to utilise both generations as part of its customer-focussed program.

“We’ll use Jim wherever it’s possible for BMW events, like Steve, to provide his expertise and experience racing BMWs,” he told Speedcafe.com.

“It will allow us to deliver a truly unique Australian experience with our customers, which is the focus of what we’re doing.”

Jim Richards was called into BMW’s JPS-backed touring car team in 1982 by the late Frank Gardner following a falling out with previous driver Allan Grice.

The German marque’s ATCC campaign had started in the previous year, but largely struggled against increasingly hot competition from Holden, Ford, Mazda and Nissan in the politically-driven Group C era.

A string of disappointments included a disastrous 1983 Bathurst campaign that saw its long-awaited 24-valve engine hit trouble amid allegations that a rival team had tampered with its fuel supply. The move to international Group A regulations for 1985, however, put Richards and BMW Australia in the box seat, importing two well proven cars from Munich before steamrolling the championship.

“Originally when I joined BMW we were racing a 300bhp car against 400 and 500bhp cars, so we were really up against it,” reflects Richards.

“In ’85 we were basically handed a car that was a front-runner in Europe, all ready to go.

“Its only real weakness was that it was built for rolling starts, rather than standing starts, so it had a tall first gear and an awkward clutch.

“So we’d be forever losing places off the start and then trying to climb back through the field after that. But it was exciting because you really had to be on the ball.

“Then when the M3s came along, they were only a little four-cylinder against the V8s and turbos, so it was hard work to win the championship that year.

“But they were brilliant cars and obviously winning the second title at the final round was a great memory.”

Richards now owns the 635 CSi that team-mate Neville Crichton raced during the 1985 season, as well as one of the two M3 chassis that he utilised on the way to the title two years later. 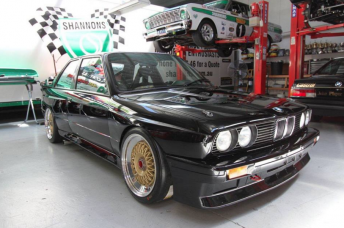 The veteran also enjoys occasional outings in one of the Group C specification BMWs, which is owned by a New Zealand-based friend.

Although still a front-runner in the TCM and tarmac rallying, where he has excelled in Porsches for several decades, Richards has ruled out the possibility of co-driving with Steve in the M6.

The two generations shared a car to a podium finish in the 1997 Bathurst 1000 but, according to Richards Sr, are unlikely to join forces again.

“We were going to team up a couple of years ago in the Carrera Cup (Pro-Am round), but then at the last minute they said I was a professional so we couldn’t,” he said.

“But I’m not interested in doing it now. If I was still doing Bathurst in V8s, then you’d consider it because you’re still driving cars at that level.

“In the Touring Car Masters things happen a lot slower and it’d be silly to stick your hand up for a GT endurance race these days with how fast the cars are.

“Don’t get me wrong, a TCM car will go down the straight at Bathurst as fast as a V8 Supercar, but they happen a bit slower in the corners, which is where the driver makes the difference.”

Richards confirmed he’ll return for another TCM season in 2016, where he campaigns an AMC Javelin.

Next Story Quinn: No 'full factory' teams in Australian GT