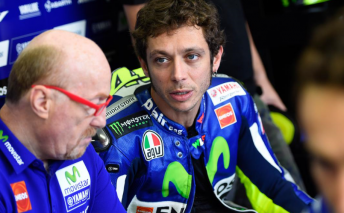 Valentino Rossi has withdrawn his appeal filed to the Court of Arbitration for Sport against the sanctions received from his Sepang clash with Marc Marquez.

The Yamaha rider appealed to the Swiss court after receiving three penalty points on his licence, which forced him to start from the rear of the grid for the title deciding Valencia finale.

Rossi had hoped for a stay of execution in his appeal before the Valencia race but was denied.

The nine-time world champion fought from the back of the grid to fourth in Valencia but missed out on securing the world championship, which was won by race winner Jorge Lorenzo.

“Mr Rossi has now informed the CAS that he does not wish to continue with his appeal,” read a statement.

“Accordingly, the arbitration procedure has been terminated and the FIM decision will continue to remain in force.”