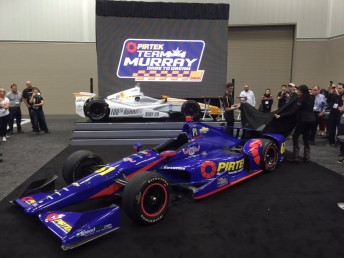 The Australian conceived Pirtek Team Murray operation has taken the covers off its weapon for the 100th running of the Indianapolis 500 next May.

And in another development for the squad, it has formed an association with the Chris Kyle Frog Foundation to honour the late Navy SEAL of the same name who was depicted in the Academy Award-winning movie American Sniper.

The car, which will see young Matthew Brabham continue his famous family’s name at the Brickyard will carry the #61 to reflect the year in which his grandfather Sir Jack Brabham first raced in the 500 in 1961.

The Chevrolet-powered machine, which will be prepared by KV Racing Technology, was launched at the PRI Motorsports Product Show in Indianapolis sporting predominantly deep blue hues of major backer Pirtek.

Chris Kyle’s widow Taya officially took the covers off the IndyCar which Brabham will attempt to qualifying in the 200-lap race scheduled for May 29.

Taya, who is the official ambassador for the team, said it was an honour to be involved with the team. 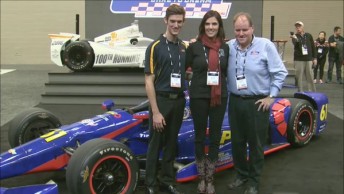 “The Chris Kyle Frog Foundation is honored and incredibly excited to be a part of Pirtek Team Murray and the 100-year tradition rooted in excellence that is the Indianapolis 500,” Taya said.

“Team owner Brett Murray and many of those involved with Pirtek Team Murray are close friends of my sister, Ashley and her family in Australia, we’re humbled that Brett has presented the Chris Kyle Frog Foundation this opportunity and look forward to working with the team to leverage our programs.”

Murray said the Foundation, which was launched a year ago, was an important link to the team.

“Since the Foundation was launched in November 2014 it has been very close to our business, but more importantly close to our heart in both the U.S. and Australia,” Murray said. 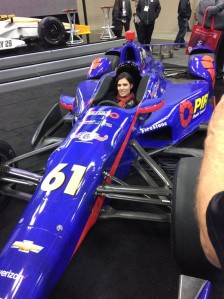 Brabham, 21, who was born in Florida and raised on the Gold Coast said the Foundation’s involvement as the official charity with the team was a special link.

“Everyone knows what sort of a gladiator he was, so to have Taya standing with us today is a real honor.”

More information about the Foundation’s involvement with the team will be made in the lead-up to the Indy 500.

Team Murray intends to field Brabham in the Angie’s List Grand Prix on the Indianapolis road course on May 14 ahead of practice and qualifying for the 500.