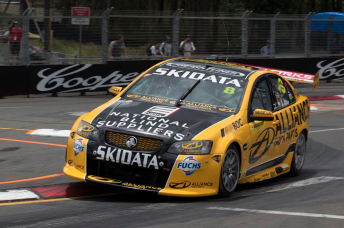 Brad Jones Racing will run a total of seven V8 Supercars across three classes next season as it expands into the Kumho V8 Touring Car Series.

The Albury-based squad has confirmed that it will move Andrew Jones’ current Dunlop Series car into the third-tier class for a yet-to-be-named driver.

Team owner Brad Jones says that the Kumho Series, which is welcoming VE Commodores and FG Falcons for the first time next season, has developed into a strong entry-level V8 category.

“The thing I like most about the Kumho Series is that it is an opportunity to drive a V8 Supercar without the massive pressures that come from being in the V8 Supercars Championship and Dunlop Series,” Jones said.

“It is perfect for someone new to the sport that wants to be a touring car driver rather than going through the open-wheeler route as they can be learning what makes a touring car work from day one.

“We are excited to be involved with the Kumho Series. We’d really like to run a car in this category as a stepping stone pathway for a young driver to our other championship programs.”

The first team to field cars in all three tiers, BJR has already confirmed Jason Bright, Tim Slade and Tim Blanchard for its V8 Supercars Championship tilt next year.

It will also continue to run three Dunlop Series cars, which are expected to be driven by existing pilots Josh Kean, Macauley Jones and Andrew Jones.