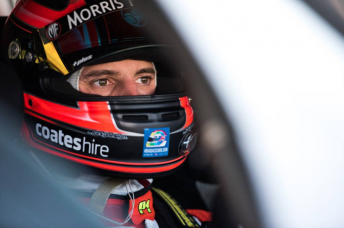 Former Great Race winner Nick Percat is set for his first crack at the Bathurst 12 Hour next February aboard a Lucas Dumbrell Motorsport run Lamborghini.

The move coincides with Rullo’s 15-year-old son, Alex, signing to drive a Dunlop Series entry for the V8 Supercars squad.

Peter Rullo bought his Gallardo from Roger Lago midway through this year, subsequently housing the car at his own workshop in Perth.

Running one of its V8 Supercars at the Perth Motorplex this weekend as part of the Perth Speed Fest, LDM will take Rullo’s Gallardo back to Melbourne to finish preparations for Bathurst.

Rullo will share the car with Percat in February’s race and is also working to secure the youngster’s V8 Supercars co-driver Oliver Gavin.

The 27-year-old Percat has extensive experience in Carrera Cup Porsches but is yet to sample FIA GT3 specification machinery.

Bathurst will mark the South Australian’s first race since being sidelined for the last two V8 Supercars events with an infection stemming from a burn sustained in October. 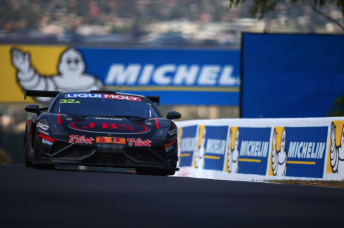 Rullo will campaign an ex-Lago Lamborghini next season

“I’m pretty pumped because obviously it’ll be a bit like the Porsche but with even more aero and tyre grip,” Percat told Speedcafe.com of his 12 Hour drive.

“Looking at the times the cars have done in recent years, it’ll be a pretty eye-opening experience between The Cutting and The Elbow.

“It’s a great opportunity to do it with LDM and Peter, considering that I’ll be mentoring Alex in the Dunlop Series.

“If we can have Olly there as well it’d be amazing. GT enduros are obviously his element and if it comes off it’ll be a perfect start to the year for both of us.

“At the moment I’m just looking forward to jumping in and doing some laps in January because I’ll have been out of any car for a few months by then.”

He made his Bathurst 12 Hour debut this year aboard a Class B Porsche, finishing third in class alongside Tim Macrow and Devon Modell.

“I was having a chat to Lucas and we came up with a plan to move forward that works for everyone,” Rullo told Speedcafe.com of the deal. 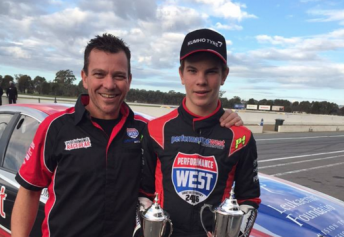 Peter and Alex Rullo at Winton earlier this year

“Most of the GT races are on V8 Supercars events, so it works out economically for these guys (LDM) to run all four cars.

“Later in the year I’d like to have Alex in the car so we can do some (GT) enduros as well as a father-son combination.

“He’ll still be too young to run at Bathurst in February, but he’s pretty excited about what’s coming up in the Dunlop Series.”

The now Rullo owned Lamborghini qualified second on the grid for this year’s Bathurst 12 Hour in the hands of David Russell before going on to finish seventh in the race.

Lago has a new Gallardo in which he will again be partnered by Russell and Steve Owen for the race.