Nissan Australia boss Richard Emery says his company must wait for Nismo to develop a technical support program for customers before ushering its GT-R into the Australian GT Championship.

The Australian arm of the company announced on Friday that it has purchased its own GT-R GT3 from Nismo for its return to the Bathurst 12 Hour.

The car will stay in Australia following February’s endurance event, raising hopes that it could be seen in Australian GT later in the season.

Respectful of category owner Tony Quinn’s caution on having full factory entries in Australian GT, Emery says the company has no budget set aside for racing the car outside of Bathurst.

While keen to see GT-Rs take to the track in customer hands, a technical support program needs to be structured around multiple cars before any local sales can take place.

“Genuinely the plan is just to park it in the corner for the year unless there is an obvious reason for using it at a particular event or activity,” Emery told Speedcafe.com.

“We’ve had a number of private teams ask us about purchasing a GT-R, but our preference at this point in time is to keep our car until the following 12 Hour.

“We’ll potentially buy another one (for Bathurst in 2017) and slowly over the next couple of years build up a bit of a grid of them.

“Globally they don’t have a technical support program to do it right like Audi and a few others have and I don’t really want to start that up for one car. Nissan will defend its B12H crown in February

“That’s the thing that’s holding us back from being a bit more aggressive with getting these cars into customer hands.

“If Nissan New Zealand say their dealers can put some money together to do Highlands (101 in November), we could do something like that, but we haven’t got that far yet.

“At the moment, we might do some track days with it with GT-R customers as a two-seat experience and things like that, but that’s about where it’ll stop.”

Emery adds that he understands Quinn’s widely stated view that full factory entries could hurt the Australian GT Championship, which has been built on a Pro-Am based customer format.

Factory interest in the championship, which later today will see BMW Australia launch its own program, has so far been based around supporting customers keen to race their products.

“I think it’s got a nice mix at the moment and to take the step into factory operations is a significant step that changes the personality and the character of the category.

“If Tony’s attitude is ‘let’s get bigger and badder and factory’, we’ll think about it, but we’re happy to respect where the category is at.”

Full factory efforts are however now commonplace at the Bathurst 12 Hour, where Nissan will be looking to defend its crown next year. 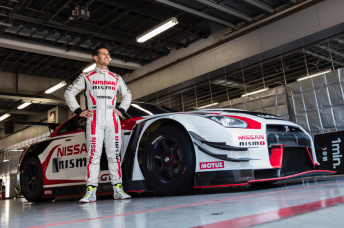 Its team will again be led by Brit Bob Neville, with an army of engineers and mechanics to be assembled from Nismo and the Nissan Motorsport V8 Supercars team.

Although Australian GT Academy winner Matt Simmons has been ruled out ahead of his Blancpain Endurance Series assault, the car’s driver line-up remains far from settled.

“We’ve got a list of about 15 guys that want to drive, including the guys that ran last year,” said Emery.

“(Alex) Buncombe who missed out (due to the birth of his child in the UK), the V8 (Supercars) drivers, Lucas Ordonez, Jann Mardenborough, there’s a whole bunch there.

“At the moment we’re just waiting for all of those to have their FIA seedings finalised before we commit to who we’re going to run.

“But with the way the program is being funded and developed, we want to very much make it an Australian effort. There will be at least one Australian in the car.”

Emery stresses that Nissan’s involvement in GT3 racing in Australia complements, rather than threatens, its V8 Supercars program, which remains up in the air beyond 2016.

“If you’re a company that’s committed to motorsport in this country than you can do both,” he said.