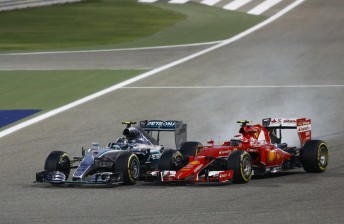 Mercedes has started legal action against a Ferrari bound employee

Mercedes has filed a law suit against a Ferrari bound engineer it has accused of stealing sensitive data from the team.

According to Bloomberg, Mercedes AMG High Performance Powertrains is suing Benjamin Hoyle after claims the engineer, who handed in his resignation earlier this year, planned to take confidential documents in a move to Ferrari.

Mercedes alleges that Hoyle, who joined the German firm in 2012 after spells working for Prodrive and Cosworth, saved sensitive F1 engine performance files and reports on external hard drives.

Mercedes has confirmed that legal action is underway and is demanding that the files are returned to the team, legal fees paid and that Hoyle is prevented from joining Ferrari or any other F1 team until after 2016.

The operation also demands that an injunction is served to stop Hoyle from using the information.

“A legal action is underway involving Mercedes AMG High Performance Powertrains Ltd and an employee who is due to leave the company at the end the year,” read a statement from Mercedes.

“The company has taken the appropriate legal steps to protect its intellectual property. We ask for your understanding that we do not wish to comment further on this matter.”