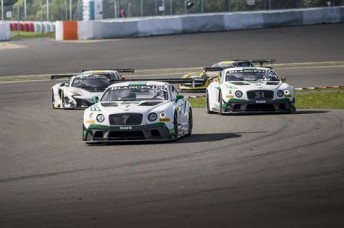 Bentley will step up its Bathurst preparations when it makes its debut at the Sepang 12 Hours this weekend.

The famous British marque will field two factory backed M-Sport prepared Continental GT3s at the once around the clock endurance at Malaysia’s Sepang circuit.

The event is a prefect opportunity to gear up for February’s Bathurst 12 Hour as the manufacturer returns for a second crack at conquering the mountain.

The sister car will be driven by Maxi Buhk, Andy Soucek and Maxime Soulet, who contested this year’s Blancpain Endurance Series.

“Sepang 12 Hours gives us the opportunity to race in a region that is very important for Bentley,” explained Brian Gush, director of motorsport at Bentley.

“In addition, it allows us to continue racing in the winter season and is good preparation for Bathurst 12 Hours in February.

“We’ve had a successful 2015 season, finishing the Blancpain Endurance Series in second place, so our driver line-up remains much unchanged.

“However, we look forward to welcoming Vince (Abril) into the works team ahead of the 2016 season and will be aiming for the podium with both of our entries in the Sepang 12 Hours.”

The manufacturer is yet to confirm its Bathurst 12 Hour driver line-up although it is understood they will field a similar roster to this year’s edition, where the team was spearheaded by Smith and Kane.

Alex Yoong, Marchy Lee and Shaun Thong will drive an all Asian entry for Phoenix in the Malaysian enduro.

The German outfit is also yet to confirm its Bathurst line up for its sole entry although it is understood Winkelhock and Laurens Vanthoor are among the favourites to secure two of the seats.

The Sepang event will feature Australian team AMAC Motorsport, which will field a Porsche 997 GT3R for Warren Luff, James Winslow and Andrew MacPherson.

Practice is scheduled to begin on Thursday with the race due to begin at 1200 local time on Saturday.

Next Story Percat to spearhead LDM Lambo at Bathurst