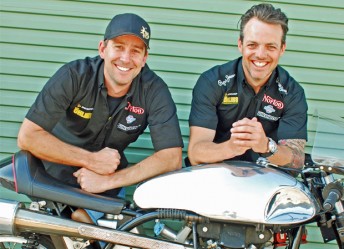 Norton has confirmed an all Australian rider line up for next year’s Isle of Man TT assault.

The British manufacturer has announced that Melbourne’s Cameron Donald and David Johnson from Adelaide will tackle the infamous road race.

Donald, who has ridden for Norton for the last two years, boasts a wealth of TT experience having made his debut in 2005.

The 38-year-old tasted victory in the Superbike and Superstock races in 2008 and has recorded Norton’s fastest ever lap around the 60.7km course.

After finishing inside the top 20 last year, Donald is looking forward to having a team-mate to compare data with next year.

“We’ve now done a huge amount of development work at the Isle of Man and having that continuity will really help us to make more progress at next year’s TT,” said Donald.

“It will be good to have two bikes out and I’m sure Dave and I will be comparing notes every session to help each other.”

Meanwhile, Johnson joins the Norton outfit as one of road racing’s rising stars having lifted the Newcomers Trophy on his TT debut in 2010.

The South Australian holds the ninth fastest lap ever recorded at the TT with a best finish of fourth in the Superstock class in 2014.

“It’s going to be an incredible experience at next year’s TT,” said Johnson.

“Riding a Norton around the Isle of Man Mountain Course, and with Cameron Donald as my teammate is a massive honour. I’m really stoked and will give it my best shot.”

Adelaide’s Glen Richards will act as the squad’s development rider for the campaign.