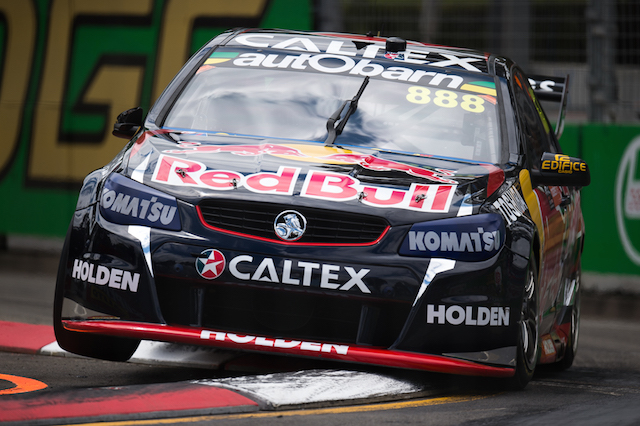 Powerful team owner Roland Dane has pledged his allegiance to V8 Supercars by saying he is not angling to exit the series after a recent ownership shake-up of the champion squad.

Dane disclosed to Speedcafe.com that he and his long-time business partners retain a majority shareholding in the Brisbane operation while the three aforementioned shareholders account for a combined total of around 30 percent.

“The split between the three of them is around 30-32 percent,” Dane revealed to Speedcafe.com.

“And I have contracted to all the shareholders, which includes my business partner in the UK of the last 30 years, as the managing director of Triple Eight Race Engineering Australia for a minimum of the next five years.

“So anyone who thinks I’m going anywhere is an optimist or knows something I don’t.”

Dane explained the need for fresh investment came after a wake-up call from his close friend and business associate, former F1 driver Derek Warwick who is recovering after contracting bowel cancer.

“The catalyst was Derek ringing me one day to say that he had bowel cancer and he was going in for an operation and then after that chemo treatment,” Dane explained.

“He (at 61 and two years older than Dane) and I are the same era and it just made me firstly go to the doctor and secondly think that I needed to have that succession plan in place.

“And part of that is making sure that Triple Eight has got a plan in case something happens to me whether I’m incapacitated or whatever.”

Among the criteria Dane sought in the new investors was ensuring that the company would be in safe hands if he was somehow unable to continue at the helm.

“The key people for me were Tim Miles and Paul Dumbrell,” Dane began.

“As representing people I know, I trust, I think have got good business judgement and if something were to happen to me they could step into the breach and ensure the company had the best chance of getting over that and being able to go forward.

“And Trinette Shipkie is a massive fan of the team and she’d expressed an interest in the past of doing something.

“I said to her I will let you know when there’s the right chance.

“I said ‘if you want to be involved as a passive investor please do’ and she was happy to do so.

“So I’ve got people who have a vested interest in the continuity of the business and who have dug into their pockets and bought shares and now I think the future of the company is in good hands.”

Dane said that his daughter Jessica’s return to the team after briefly leaving to pursue a separate career outside motor racing means she is now a key part of Triple Eight’s future.

“My daughter Jessica is a key part of the future but she is too young and inexperienced yet to have a major role to play,” he said.

“But I want her, if she chooses to, maybe in 10 years time or something that maybe she can be a very active part of the leadership group.”