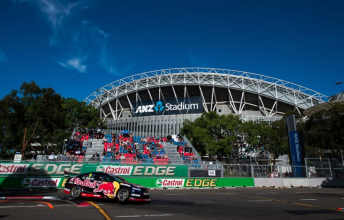 Jamie Whincup passes by the ANZ Stadium during the Sydney 500

A red light for plans to shorten the Sydney Olympic Park street circuit has triggered suggestions that the season finale could be moved elsewhere in New South Wales.

Looking to reduce the high costs of staging the Coates Hire Sydney 500, V8 Supercars and its engineering partner IEDM developed a plan to overhaul the layout ahead of 2016.

As detailed by Speedcafe.com in June, the plan was to see the event precinct effectively cut in half, with the cars to turn left at the current Turn 2 chicane onto Olympic Boulevard.

Warburton has now confirmed that the plan has been rejected by local authorities, leaving V8 Supercars with the option of continuing with the current venue or looking elsewhere entirely.

V8 Supercars has a contract to return to Sydney Olympic Park in 2016 and also holds a two-year option to extend beyond that point.

“There’s been lots of discussion about doing a short track here and opening up viewing areas, but that’s not going ahead,” Warburton told Speedcafe.com.

“There’s heritage involved in it and part of the issue we’ve always had with this race is that the logistics of what you can and can’t do are very difficult.

“There’s a lot of orders around certain sections with the Olympic heritage and those types of things. That’s really been the sticking point.

“Most of the supporters in terms of the stadiums and those guys were on board with doing it, but it is what it is.

“There’s nothing more than that, it’s absolutely what’s going on.”

Discussions between V8 Supercars and the NSW government over a possible street race on the Central Coast are meanwhile known to have been taking place alongside the Olympic Park development plans.

Although Fairfax Media reports today that a race in Gosford is being readied to replace the Sydney Olympic Park event in 2016, Warburton insists that V8 Supercars is committed to the current venue for at least another year.

“It’s a difficult venue to work with, covering the stadiums and all the rest of it, but we will continue to work,” he said of Sydney Olympic Park.

“The circuit is spectacular, looks amazing and is a fitting championship finale.

“We’re committed for 2016 but we’ll have to think about what we do after that.”

Gosford is less than 100km north of Sydney and, coincidently, is the birthplace of V8 Supercars legend and IEDM consultant Mark Skaife.

Warburton meanwhile added that the Sydney 500 will be held on November 25-27 next year, as published in the provisional 2016 calendar.

The category had hoped to move it a week earlier, but has abandoned efforts to do so following confirmation of that date for Coffs Harbour’s round of the World Rally Championship.

“We’re extremely unhappy with the date for next year, it needs to be earlier,” he said.

“Unfortunately now we’ve got the rally on the 18th-20th, but we’ll play the game there (and not cause a clash).”

The Sydney 500 has closed the V8 Supercars season every year since its inception in 2009.