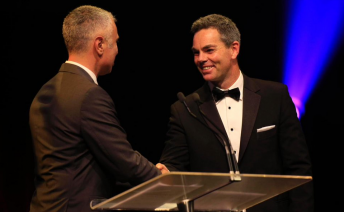 Triple Eight veteran Craig Lowndes has extended his stunning haul by winning the Barry Sheene Medal for a fifth time.

Voted the best and fairest driver, Lowndes scored a sixth victory in the Supercheap Auto Bathurst 1000 in a season which saw him spear to a milestone 100th race win in Darwin.

The 41-year-old, who finished second in the championship, was also named the Fan’s Choice Most Popular Driver.

Extrovert team owner Garry Rogers is the latest identity to be inducted into the V8 Supercars Hall of Fame.

At 70 years of age, Rogers is the 19th member added to the list of prominent figures who have played a huge role in the history of the sport in Australia.

After a challenging season which saw Ash Walsh replaced in his Erebus seat for the last two events of the season, the Queenslander landed the coveted Mike Kable Young Gun Award, named in honour of the late doyen of Australian motor racing journalism.

James Warburton used the gala night in Sydney to announce the sport was the third highest attended in Australia and is continuing to improve its commercial standing.