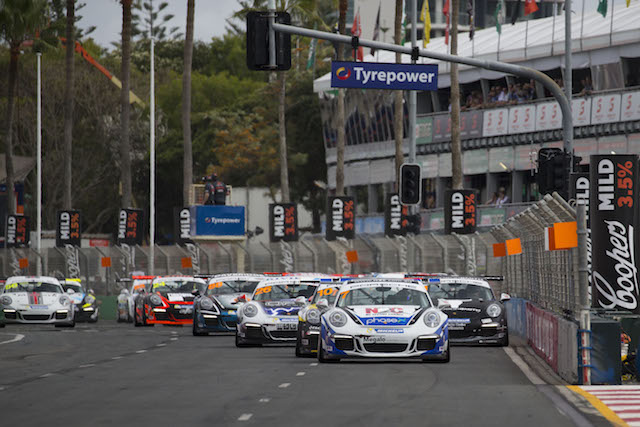 The 2016 Porsche Carrera Cup Australia calendar has been confirmed

The Porsche Carrera Cup Australia will return to Darwin for the first time in almost a decade after officially confirming its eight-event schedule.

Opening with the Clipsal 500 from March 3-6, the schedule sees the one-make series return to the Hidden Valley circuit from June 17-19.

The jewel-in-the-crown of the season will see only the second-ever Porsche Rennsport Australia take Round 3 of the series from April 29-May 1 at Sydney Motorsport Park.

This follows the hugely popular maiden Rennsport event which saw the championship’s first Pro-Am round in 2013 at the same venue.

As previously reported, Sydney’s western suburbs venue will host Round 5 from August 26-28 which will combine with Carrera Cup Asia.

After events on the Sandown 500 and Bathurst 1000 programs, the Championship will then close with the traditional fight on the streets of Surfers Paradise from October 21-23.

“We’re happy to confirm and announce another strong calendar for the 2016 Carrera Cup Australia season. It features a great mix of Australia’s best motor racing events and a new destination to give 2016 a fresh look and feel,” Porsche Cars Australia Motorsport Manager Kurt Sakzewski said.

“The inclusion of Darwin is a key change for 2016; it’s truly an amazing location and the entire region throws its support behind the Hidden Valley event.

“It is also important to retain the Clipsal 500, Australian Grand Prix, Sandown, Bathurst and Gold Coast rounds – all are tremendous events and hold a vital place in the Australian motor racing landscape.”

Sydney Motorsport Park will host the championship’s official test day, to be held on February 10, 2016.