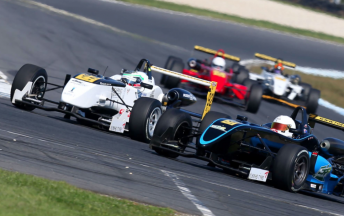 CAMS will investigate the viability of an FIA backed South East Asia F3 Championship run out of Australia following a proposal tabled at the latest World Motor Sport Council meeting.

The FIA is endeavouring to form five second tier regional F3 championships from 2017 which it believes will be stepping stones between national Formula 4 championships and the FIA European F3.

Part of the FIA’s proposal will see the championship use a common F3 chassis and engine capped at approximately 100,000 Euros ($148,000 AUD) with all rounds of the proposed Asia Pacific version to take place in Australia.

CAMS issued its own plan to the FIA to allow older machinery to be eligible for the proposed series but this failed to receive support.

Australia’s motorsport governing body will now assess the FIA’s latest proposal seeking input from the AMRC and national F3 stakeholders before committing to the initiative.

If deemed viable it remains unclear which organisational body would run the championship and how it will affect the current Australian F3 Championship.

“The FIA have agreed that we need to create this second tier F3 structure but they want to do it with a common chassis and engine format.

“That is the tactic the FIA want to take but the decision for us is whether to introduce that championship to this region and we now need to make a business case to see if it is viable.

“On the surface we think it is a great concept.

“We need to run it by the current F3 guys here in Australia and also speak to the teams to see if they have an appetite to invest in the cars.

“We will run it through the AMRC strategic group we have put together.

“Ultimately it will be the CAMS board (who will make the decision) and we will have some discussion with various stakeholders.

“We will call a meeting of the Australian Motor Racing Commission but we need to get some input from before we make any commitment on whether we are going to do it.”

Representatives from the Australian F3 Championship are due to discuss the proposal with CAMS in the coming days.